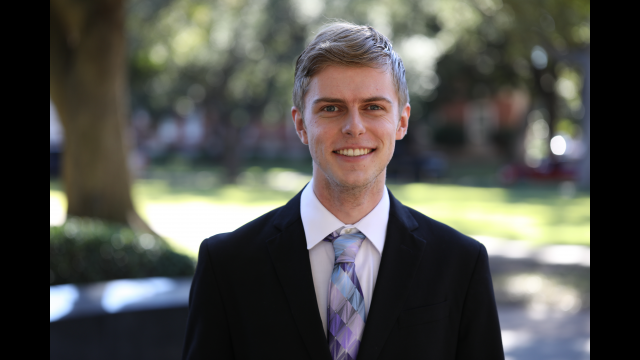 WACO, Texas (Dec. 14, 2020) – Jonathan Chew, a senior in the Business Fellows program at Baylor University, has been selected one of 12 members of the George J. Mitchell Scholar Class of 2022, a prestigious scholarship program of the US-Ireland Alliance, which sends future American leaders to Ireland for a year of graduate study.

The selection marks the first time a Baylor student has been named a recipient of the scholarship. The non-partisan and nonprofit alliance is dedicated to consolidating relations between the United States and the island of Ireland and building that relationship in various spheres — education, politics, business and the arts — for the benefit of both countries.

A record 453 individuals applied this year – a 22% increase over the record set two years ago. The scholarship was named in honor of former U.S. Sen. George Mitchell for his commitment to the peace process in Ireland.

“For my Mitchell program, I will pursue a M.Sc. in politics and data science at University College Dublin,” Chew said. “I'm honored and humbled to have been chosen for the award, and I hope I will be only the first of many Baylor students to win in the future.

“I could not have done this without the help and guidance of knowledgeable, caring professors who invested in me and challenged me to do better in my studies,” he said. “I know my time at Baylor will prepare me well for studying politics and data science. After completing my Mitchell Scholarship, I would like to continue studying politics or international relations with the hope of one day having a career in public service.”

In an endorsement letter to the scholarship’s review board, Baylor President Linda Livingstone, Ph.D., wrote that Chew’s “exceptional mind, collaborative spirit, well-honed leadership abilities and impressive experience at the intersection of geopolitics and data analytics form the solid foundation on which he builds his noble aspirations.

“We are amazed by every aspect of Jonathan Chew — his character, professional vision and accomplishments,” she wrote. “In all areas, he has demonstrated a rare level of excellence. His professors rave about his abilities — from our Russian faculty observing his mastery of the language, to his mathematics professors marveling over his analytic capabilities, to his business professors awed by his intellect.”

In addition to participating in the Baylor Business Fellows program, which allows selected high-achieving students to explore wide interests while pursuing a business degree, Chew also majors in mathematics, Russian, computer science and political science — a testament to Baylor’s commitments to transdisciplinary inquiry and university-wide collaboration on behalf of students, said Andrew Hogue, Ph.D., associate dean for engaged learning in the College of Arts & Sciences at Baylor.

“Jonathan’s ability to work across these fields was undoubtedly a key to his success with the Mitchell committee — that, and the fact that he is brilliant, winsome and deeply committed to the public good,” Hogue said. “He is astonishing, and we at Baylor are deeply gratified that the Mitchell selection committee saw what we know to be true of him.”

Chew has maximized his learning at Baylor in the classroom and beyond because he saw a unique pathway at the University to pursue multiple majors, along with study abroad, internship and public service opportunities that would equip him to engage with some of the world’s most pressing challenges, Hogue said.

“Jonathan leaves Baylor poised for worldwide leadership and service of the highest order, and we will watch his life unfold with great excitement and pride,” he said.

In spring 2019, Chew was one of only two Americans to study

at Grodno State University in Belarus. He took courses exclusively in Russian and led a seminar to teach the university’s faculty (in Russian) about American higher education, politics and history. He also taught English at a local Orthodox church.

He serves as an intern in the American Enterprise Institute’s Russian Studies program, where he works with English- and Russian-language sources to assist with the institute’s thought leadership, analysis and advocacy related to Russia’s growing influence, including in volatile places such as Belarus.

“I would like to say that everything Jonathan needed for a successful application for the Mitchell Scholarship came through Baylor, but that would not be accurate,” Seward said. “Jonathan came to us with dual citizenship in the United States and the United Kingdom, and with a deep curiosity in a variety of fields. His parents had an interest in Russia, which led to dinner conversations about U.S.-Soviet relations. Jonathan started his study of Russian while in high school. While at Baylor, Jonathan was able to enrich his cultural understanding by studying in Belarus for one semester, as well as taking two trips to work with children in Belarus. Baylor also afforded Jonathan the opportunities to study the Russian language here, study abroad as part of his curriculum and select courses in international politics and computer science, in addition to the requirements for his majors in the Hankamer School of Business.”

Flavin, who has worked with Chew in Baylor Model UN since his freshman year, said he is “a natural leader, the rare kind of student who inspires admiration rather than envy in his fellow competitors. In addition to his intellectual virtues and integrity that inspire his peers’ respect, Jonathan is a good listener, kind and respectful to all his peers, and humble.”