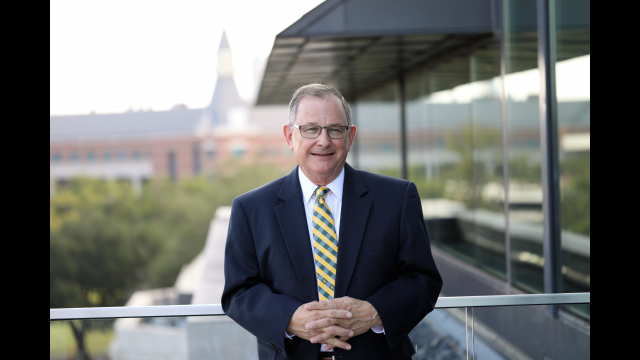 WACO, Texas (Nov. 19, 2020) – Baylor University today announced a $1.5 million gift commitment to help establish a new endowed faculty position within the Hankamer School of Business, honoring Dean Terry S. Maness, D.B.A., on his upcoming retirement and years of service. The gift, given by an anonymous Baylor alumnus, is part of a fundraising effort among the Business School’s alumni to honor Dean Maness’s legacy, while providing endowment support for the Lab-to-Market (L2M) program, an interdisciplinary program that serves as the pipeline for translating research into viable commercial and business concepts at Baylor.

“For more than 43 years, Dean Terry Maness has served tirelessly to advance the mission of Baylor University through his time as a member of our faculty, as a mentor and leader and ultimately, as dean of the Hankamer School of Business,” said Baylor President Linda A. Livingstone, Ph.D. “It is a testimony to the impact he has made on the School and his students that so many have stepped forward to honor him through the establishment of this important endowed position.

“As a young faculty member, I personally benefited from Dean Maness’s mentorship and guidance when he entrusted me with my first administrative opportunity. I will always be grateful for his support, and I appreciate the alumnus whose generosity, paired with their fellow classmates, will make this honor possible. Baylor’s faculty and administration have a calling to teach and lead, and I celebrate the support this will provide our Hankamer School of Business, and I will continue to be grateful for the legacy of Dean Maness,” President Livingstone said.

The Terry S. Maness Endowed Chair in Lab-to-Market Entrepreneurship also qualifies for the Baylor Academic Challenge program, the University’s dollar-for-dollar matching program for faculty positions created through donor support that undergird and advance the priorities of Illuminate. The faculty holder of the Maness Chair will provide leadership and strategic planning for the Hankamer School of Business’s efforts through L2M. The Maness chairholder will be instrumental in identifying and implementing opportunities and avenues for graduate and undergraduate students to participate in discovery and commercialization efforts through L2M. The Maness Chair also will coordinate faculty efforts and collaborations with other stakeholders, both within the University as well as the commercial sector, that will produce viable and efficient strategies for commercialization of research. The chairholder will seek to collaborate with faculty across disciplines and academic units, who both conduct their research on campus, as well as at the Baylor Research and Innovation Collaborative (BRIC).

“It is truly humbling to be the recipient of such a great honor as the naming of an endowed faculty position here at Baylor,” Dean Maness said. “It is critical to our research enterprise that we strengthen our approach to commercializing and monetizing that research so that it, in return, can fund future academic discovery, especially at the BRIC. As I have said before, the success of the Lab-to-Market program is critical to Baylor fulfilling the promise of the BRIC. I am so thankful for the support of our alumni and the University in helping to fund this important endeavor.”

The $1.5 million anonymous gift commitment results from discussions among the University’s administration and alumni leaders, who voiced a desire to give a gift to the University that celebrates and commemorates Dean Maness’s service and leadership within the Business School. Upon being approached for what would be an area of meaningful impact, Dean Maness proposed the L2M program for its potential to dramatically increase the amount of funding supporting research throughout Baylor’s 12 schools and colleges. The most recent gift joins other gift commitments and will be used to fund the chair and provide potential support for undergraduate and graduate student stipends, as well as programmatic funding. Fundraising for this initiative continues, as other alumni come alongside the chair position with program funding for everything from market research to prototyping.

The Maness Chair supports the Give Light Campaign, which undergirds Illuminate and impacts every aspect of campus life – academics, athletics, student life and service learning – while also bolstering financial support for students and for the priorities of Baylor’s 12 schools and colleges. Endowed faculty positions such as the Maness Chair will serve as catalysts for growth within areas of research and funding for Illuminate’s five initiatives: Health; Data Sciences; Materials Science; Human Flourishing, Leadership and Ethics; and Baylor in Latin America. The goal of Illuminate is to spur Baylor forward to become America’s preeminent Christian research university. A key factor in these efforts is the increase of research activity among the University’s faculty and doctoral and graduate programs. The strategic plan also emphasizes the four core pillars on which Baylor was built: Christian Environment, Transformational Education, Research and Scholarship and Arts and Athletics.

As the dean of the Hankamer School of Business since 1997, Maness has been the driving force behind a period of growth and acclaim for the Business School. A Baylor alumnus, Maness received his undergraduate degree in economics in 1971, followed by his master’s degree in finance in 1972. Terry and his wife, Nancy, moved to Bloomington, Indiana, in 1973, where he began his D.B.A. in finance at Indiana University. In 1977, Maness returned to Baylor as an assistant professor of finance. After 43 years in higher education, Dean Maness has announced his plans to retire from his position leading the School of Business once a new dean has been named for the School.

In 2019, Baylor announced the largest current gift in University history – a $100 million gift to the Give Light campaign. Made by an anonymous donor, the gift builds on the University’s historic strengths and provides a transformational investment in new areas of teaching, research and service. This gift to Baylor is one of only four gifts of $100 million or more to institutions of higher education in Texas. A significant portion of the $100 million gift created a matching fund to launch the Baylor Academic Challenge and provided the lead investment in the Baylor Basketball Pavilion, a state-of-the-art $105 million facility that will become the new home of the men’s and women’s basketball teams.

ABOUT HANKAMER SCHOOL OF BUSINESS AT BAYLOR UNIVERSITY

A significant portion of the $100 million gift created a matching fund to launch the Baylor Academic Challenge, which will maximize Baylor’s investments in promising research and academic programs by matching dollar-for-dollar significant additional gifts from other donors, fueling the University’s academic enterprise. The program seeks to increase the number of endowed faculty positions, helping Baylor generate additional funding to sustain and grow teaching and research in key areas. Another portion of the $100 million gift provided the lead investment in the Baylor Basketball Pavilion, a state-of-the-art $105 million facility that will become the new home of the men’s and women’s basketball teams.