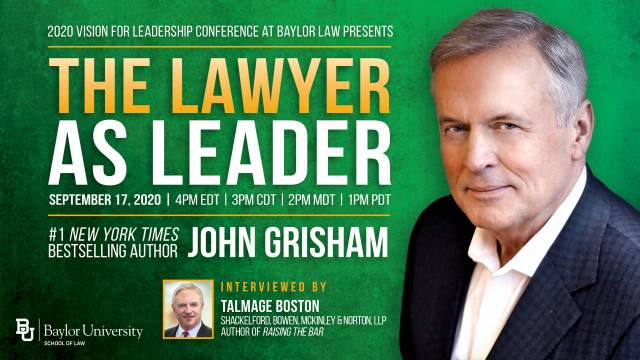 Best-selling author John Grisham, author of A Time to Kill, The Firm, The Pelican Brief, and a broad array of other perennial best-selling books, will be interviewed by noted attorney and author Talmage Boston during the final session of the weeklong Vision for Leadership Conference at Baylor Law.
Tweet
Sept. 15, 2020

Best-selling author John Grisham, author of A Time to Kill, The Firm, The Pelican Brief, and a broad array of other perennial best-selling books, will be interviewed by noted attorney and author Talmage Boston during the final session of the weeklong Vision for Leadership Conference at Baylor Law. The conversational style interview on Thursday, September 17 at 3 p.m. (CDT) will focus upon the imperative for lawyers to lead in the many venues in which they live and work.

Grisham will discuss a variety of subjects related to the American justice system, such as how he has used his novels to address wrongs and inequities within our legal system—as he has done in The Innocent Man, The Guardians, and The Appeal. But the works that Grisham is most famous for are only a small part of how he has used his skills as a lawyer to make a difference in our society. After recognizing that children needed an engaging way to learn more about our justice system, as pointed out to him by his schoolteacher daughter, he began writing the Theo Boone series which is focused upon a “kid lawyer” and his adventures. Grisham is also an active advocate for the Innocence Project movement, access-to-justice issues and stresses the importance of legal aid to the underserved. Recently, he has been focusing his efforts on childhood hunger issues and advancing the cause of the No Kid Hungry program.

Grisham rose to prominence during the 1990s as the master of the legal thriller. After publishing A Time to Kill in 1987, he wrote The Firm, which became the best-selling novel of 1991 and was followed by The Pelican Brief, The Client, and more than a dozen other bestsellers. In all, he has written dozens of novels, nine of which have been turned into feature films. There are over 300 million John Grisham books in print worldwide, which have been translated into 40 languages. In 2006, he published his first work of non-fiction, The Innocent Man: Murder and Injustice in a Small Town, which recounted the story of a man wrongfully convicted of murder in Oklahoma.

Boston, author of 1939: Baseball's Pivotal Year: From the Golden Age to the Modern Era, Raising the Bar: The Crucial Role of the Lawyer in Society, and Cross-Examining History: A Lawyer gets Answers from the Experts about our Presidents, maintains his full-time law practice as a commercial litigator in Dallas, Texas. He has been recognized in Texas Monthly magazine as a “Texas Super Lawyer” every year since 2003 and named among the “Best Lawyers in America” since 2013.

“We are thrilled to have such distinguished authors close the 2020 Vision for Leadership Conference. Talmage is a gifted interviewer who skillfully elicits the best insights from anyone he interviews. To have him sit down with one of the masters of the legal thriller will be an amazing experience. A conversation between these two notable authors who understand the intricacies of the American justice system will be an incredible culmination to end this week’s conference – a symposium already stacked with high-profile and impressive speakers,” stated Leah Teague, Baylor Law associate dean and co-organizer of the 2020 Vision for Leadership Conference.

“We are truly honored to have them join us,” Stephen Rispoli, assistant dean of student affairs and pro bono programs and co-organizer of the conference added. “We hope lawyers and legal educators will join us for as many of the other important conversations this week as schedules allow.”

One of only a handful of law schools in the country with a robust Leadership Development Program and leader in the nascent movement of Leadership Development in legal education, Baylor Law is hosting the 2020 Vision for Leadership Conference September 14 – 17. The free, all-virtual conference – approved for 7.5 hours of MCLE Credit (3.5 Hours for Ethics) for lawyers – has brought together high-profile speakers from law schools from across the nation along with distinguished attorneys to discuss the role of lawyers as leaders in their communities charged with protecting the rule of law – the basis of our system of democracy – and advancing society toward “a more perfect union.”

Watch the livestream of the conference session with authors John Grisham and Talmage Boston on Baylor Law’s YouTube Channel, www.YouTube.com/BaylorLaw.

Established in 1857, Baylor University School of Law was one of the first law schools in Texas and one of the first west of the Mississippi River. Accredited by the American Bar Association and a member of the Association of American Law Schools, Baylor Law has more than 7,600 living alumni and a record of producing outstanding lawyers, many of whom decide upon a career in public service. The Law School boasts among its notable alumni two governors, members or former members of the U.S. House of Representatives and the U.S. Senate, two former directors of the FBI, U.S. ambassadors, federal judges, justices of the Texas Supreme Court and members of the Texas Legislature. In its law specialties rankings, U.S. News & World Report ranks Baylor Law’s trial advocacy program as among the best in the nation at No. 2, while the Law School is ranked in the Top 50 of the 2021 edition of “Best Graduate Schools.” The National Jurist ranks Baylor Law as one of the “Best School for Practical Training,” and in the top 15 “Best Law School Facilities” in the country. The Business Insider places Baylor Law among the top 50 law schools in the nation. Baylor Law received the 2015 American Bar Association Pro Bono Publico Award, making it only the third law school in the nation to be honored with the award since the award’s inception in 1984. Learn more at baylor.edu/law

Baylor University is a private Christian University and a nationally ranked research institution. The University provides a vibrant campus community for more than 17,000 students by blending interdisciplinary research with an international reputation for educational excellence and a faculty commitment to teaching and scholarship. Chartered in 1845 by the Republic of Texas through the efforts of Baptist pioneers, Baylor is the oldest continually operating University in Texas. Located in Waco, Baylor welcomes students from all 50 states and more than 80 countries to study a broad range of degrees among its 12 nationally recognized academic divisions. Learn more at baylor.edu.