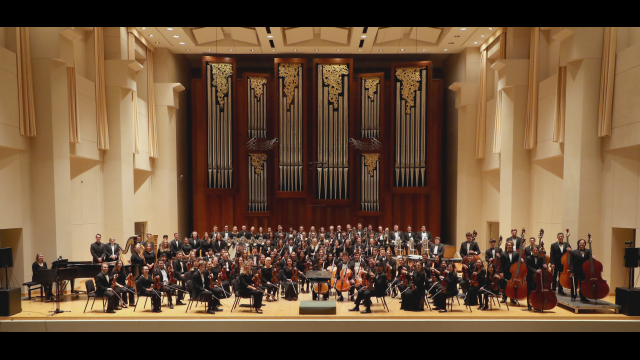 WACO, Texas (Sept. 8, 2020) – Baylor Symphony Orchestra, led by Baylor Conductor-in-Residence Stephen Heyde, has received The American Prize in Orchestral Performance in the college/university category, making this its fifth time to win first place in the past six years.

The Baylor Symphony Orchestra’s winning recorded performance was Symphony No. 2 in C minor, “Resurrection” by Gustav Mahler, during the Feb. 8, 2019, President’s Concert: Baylor Symphony; A Cappella Choir; and Concert Choir.

The orchestra also is the first ensemble in any of the competition’s categories to win first place five times in six years, not just the first university to do so. This is significant because there are also categories for professional, community and youth ensembles in various musical disciplines, according to competition officials.

“I am very gratified by this national recognition,” said Heyde, The Mary Franks Thompson Professor of Orchestral Studies at Baylor's School of Music. “For me, winning the award as consistently as we have over the past six years indicates that the program has gained momentum and a reputation for excellence.

“It means that we have attracted truly outstanding, talented students who understand the work ethic required to play some of the most exalted pieces ever created at the level of excellence that repertoire deserves,” he said. “It indicates that our wonderful instrumental faculty have developed and challenged our students to excellence and have spent the many extra hours necessary to help them meet the high expectations we have for them as musicians and people. It means that the administration of the School of Music and the University have provided the encouragement and support necessary for the program to flourish and compete successfully with the most storied orchestral programs nationally.

“But more than anything, winning again is confirmation of how special our students are and how incredibly fortunate I am to have the opportunity to work and make music with them,” Heyde said. “They inspire me every day.”

The American Prize National Nonprofit Competitions in the Performing Arts is the nation’s most comprehensive series of contests in the classical arts. The nonprofit competition, unique in scope and structure, is designed to evaluate, recognize and reward the best performances, ensembles and composers in the United States.

“I am so pleased for our Baylor Symphony Orchestra students led by Maestro Heyde. They are so hardworking and dedicated to their craft, and they take direction so well from our superb faculty both on the podium and in the studio,” said Gary Mortenson, D.M.A., dean of the School of Music at Baylor. Our music students take their studies of music history and theory very seriously, and that academic rigor pays off on stage during live performances.

“All of that combined with a generous spirit and a humble mindset makes for joyful interpretations of musical treasures,” Mortenson said. “That’s what it takes to come across to national adjudicators, in a blind audition setting, where the judges listen to many recordings and are looking for a winner that has a distinctive quality of excellence that doesn’t translate into words. They just know it when they hear it.”

The first-place orchestra in each division receives a cash award, certificates, written professional adjudication and regional, national and international recognition based on recorded performances. The contest does not include live competition.

In addition to written evaluations from judges, winners are profiled on The American Prize websites, which link to video and audio excerpts of artist performances. The American Prize has awarded nearly $100,000 in prizes in all categories since 2010 and is presented annually in many areas of the performing arts.

Emily Monk, a master of music performance major, said that the orchestra “has been my musical home for the past six years. It has allowed me to express myself through the pieces that we play, to grow as a musician and to learn how to be a good team leader and team member.

“It has been a tremendous blessing to be able to perform timeless masterpieces with an orchestra made up of professional-level musicians and even greater friends,” she said. “Mr. Heyde's leadership has taken this ensemble to the highest level of excellence with humility, and I truly value his mentorship over the years.”

Jillian Ekstrand, a junior music education major, said that playing in the orchestra has been “one of the most challenging yet fulfilling musical experiences of my career. I am blessed to perform such incredible music with my talented and motivating colleagues as well our passionate maestro who teaches to perform with integrity and humility. Through BSO, I have gained invaluable leadership skills and feel like part of a community that strives to honor the music through hard work and is dedicated to reaching others through this beautiful and powerful medium.

“I always leave rehearsals wanting to be a better musician, and I hope to inspire my students in the same way.”

Baylor Symphony Orchestra is Baylor’s flagship orchestra, dedicated to the quality performance of the orchestral repertoire and to the professional and artistic growth of its members. Initiated in 1946, the Baylor Symphony has had only two permanent conductors. Founding director Daniel Sternberg passed the baton to Stephen Heyde in 1984. In a typical semester, 90 to 100 Baylor students, hailing from more than two dozen states and several foreign countries, perform in the ensemble. The Baylor Symphony has an extensive performance schedule on and off campus, annually presenting four to six concerts of standard orchestral repertoire, a full opera production and other events such as concerto accompaniments, new music readings and choral/orchestral collaborations. The orchestra also presents a series of concerts each year to an audience of more than 6,000 Waco area schoolchildren, a tradition since 1946.

Through the years, the 90-member Baylor Symphony has worked with many distinguished performers, among them Van Cliburn, Robert Shaw, Josef Gingold, Corey Cerovsek, Jacob Druckman, Lorin Hollander and Peter Schickele.

ABOUT THE BAYLOR UNIVERSITY SCHOOL OF MUSIC

The Baylor University School of Music provides transformational experiences that prepare students for careers in music. Students thrive in a Christian environment characterized by a nurturing resident faculty, an unwavering pursuit of musical excellence, a global perspective, dedication to service and devotion to faith. They investigate the rich musical and cultural heritage of the past, develop superior musical skills and knowledge in the present, and explore and create new modes of musical expression for the future. While preparing for future leadership roles, students join with School of Music faculty in enhancing the quality of community life, enriching the larger culture and making Baylor a place in which heart, mind and soul coalesce. Baylor’s School of Music is a member of the National Association of Schools of Music and the Texas Association of Music Schools. Degree programs include bachelor’s and master’s degrees in performance, music education and academic majors, as well as doctoral degrees in church music. Degrees leading to the Bachelor of Music Education conform to certification requirements of the Texas Education Agency. Visit baylor.edu/music to learn more.