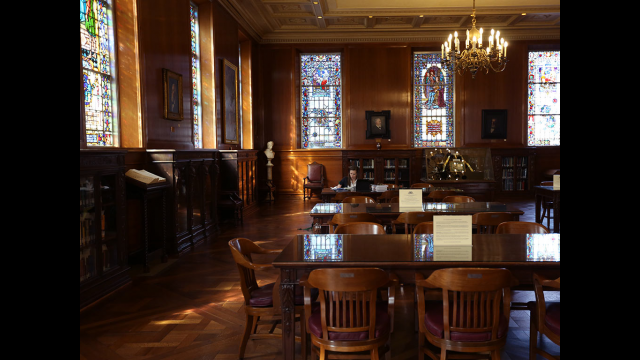 WACO, Texas (Sept. 7, 2020) – Baylor University Libraries has been awarded a $300,000 grant from the National Endowment for the Humanities (NEH) to support the research of two Browning scholars.

Philip Kelley and Edward Hagan, research fellows with Baylor's renowned Armstrong Browning Library, will use the funds to edit and publish volumes 31 to 33 of The Brownings’ Correspondence, an annotated edition of all known letters written by and to Victorian poets Robert and Elizabeth Barrett Browning. Predicted to be a 40-volume edition, The Brownings’ Correspondence provides one of the largest and most comprehensive bodies of literary and social commentary on the 19th century.

As a 19th-century research center, Baylor's Armstrong Browning Library is dedicated to the study of the lives and works of Victorian poets Robert and Elizabeth Barrett Browning and houses the world's largest collection of Browning material and other fine collections of rare 19th-century books, manuscripts and works of art.

Kelley and Hagan have collaborated with Armstrong Browning Library for many years, but this NEH grant represents the first time Baylor will serve as the grantee institution administering a federal grant for their work.

“Receiving this grant to further edit the correspondence of Robert and Elizabeth Barrett Browning is a great honor,” Kelley said. “As a graduate of Baylor, who served as a student assistant to Dr. and Mrs. Armstrong, I am pleased the University sponsored this application.”

“Since future volumes will primarily rely on manuscript holdings of Armstrong Browning Library, Baylor’s partnership does much to ensure the successful completion of the edition,” Kelley said.

The goal of The Brownings’ Correspondence is to provide accurate and complete transcriptions of all known Browning letters – currently 11,693 letters have been located – and complement them with full annotations using a consistent editorial standard. Further, the project aims to make the correspondence widely available in print and online. When Kelley published the first volume of the correspondence in 1984, less than a third of all known letters had appeared in print, scattered in numerous publications, each with its own editorial standard. These publications were consulted and are referenced in the bibliographic notes that appear with each letter.

Since 1979, the NEH has supported the Brownings' Correspondence Project with 20 grants totaling $3.275 million.

“The Brownings’ Correspondence is vital to our understanding of the lives and works of Robert and Elizabeth Barrett Browning,” said Jennifer Borderud, associate librarian and director of Armstrong Browning Library. “I am grateful to the NEH for its recognition and support of this important work of scholarship.”

For more information on The Brownings’ Correspondence, please visitbaylor.edu/browninglibrary.

ABOUT THE NATIONAL ENDOWMENT FOR THE HUMANITIES

Created in 1965 as an independent federal agency, the National Endowment for the Humanities supports research and learning in history, literature, philosophy, and other areas of the humanities by funding selected, peer-reviewed proposals from around the nation. Additional information about the National Endowment for the Humanities and its grant programs is available at: www.neh.gov.

The Baylor University Libraries lead as an innovative research library that undergirds scholarship, fosters teaching and learning, and builds communities. Comprised of the Central Libraries and world-renowned special collections that include Armstrong Browning Library, The Texas Collection and University Archives, The Institute for Oral History, the Keston Center for Religion, Politics, and Society, and the W. R. Poage Legislative Library, the Libraries drive research at Baylor University and beyond.