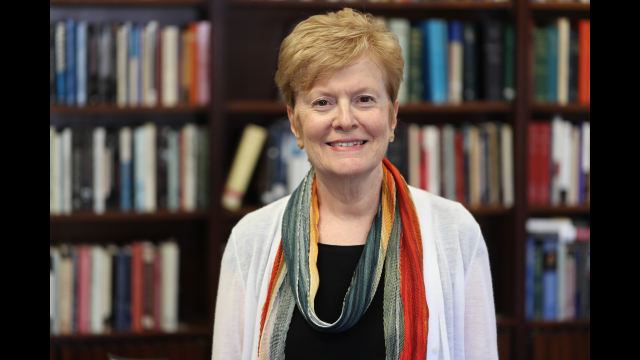 WACO, Texas (Aug. 12, 2020) – Beverly Roberts Gaventa, Ph.D., Distinguished Professor of New Testament Interpretation in the department of religion at Baylor University, has been awarded the prestigious Burkitt Medal for Biblical Studies by The British Academy. She is one of only a few Americans to receive this award, established nearly a century ago.

"The Burkitt Medal from The British Academy is one of the most significant recognitions ever bestowed upon a Baylor faculty member in the history of our University," said Mikeal C. Parsons, Ph.D., professor and holder of The Kidd L. and Buna Hitchcock Macon Chair in Religion. "We are delighted that Dr. Gaventa's lifetime achievements in scholarship, teaching and service have been recognized by this veritable institution."

The award was established in 1923 by The British Academy, a fellowship of some 1,400 leading national and international academics elected for their distinction in the humanities and social sciences. The first Medal was first awarded in 1925.

Each year, The British Academy elects to its fellowship up to 52 United Kingdom-based scholars who have achieved distinction in any branch of the humanities and social sciences. Others based overseas can be elected as Corresponding Fellows, and the Academy can elect Honorary Fellows. The Burkitt Medal is awarded annually in recognition of special service to biblical studies, with Hebrew Bible studies in odd years and New Testament studies in even years.

John M.G. Barclay, Ph.D., a Fellow of The British Academy and Lightfoot Professor of Divinity at Durham University in Durham, England, said that Gaventa's selection will delight biblical scholars worldwide.

"Over many years, she has given outstanding leadership to New Testament scholarship, both in the quality of her work and in the ways she has mentored and supported younger scholars," Barclay said. "This accolade, awarded to only one New Testament scholar every other year, is a mark of the exceptional regard in which she is held internationally and of the ways she has enabled her discipline to retain its intellectual vibrancy and contemporary relevance."

"I am both astonished and deeply gratified by this award from The British Academy," Gaventa said.

"The most straightforward thing to say is that I understand my pedagogical vocation as enabling students to be better readers," she said. "As it happens, my text is Scripture, but what I do could apply to many other texts as well. I want students to slow down, to attend to the historical and literary and social context of Scripture and so to enlarge their capacity for comprehension."

In addition to her position at Baylor, Gaventa is The Helen H.P. Manson Professor of New Testament Literature and Exegesis Emerita at Princeton Theological Seminary. She has written numerous articles and edited volumes, as well as a number of books, among them "Our Mother Saint Paul," "The Acts of the Apostles," "I and II Thessalonians," "Mary: Glimpses of the Mother of Jesus," "From Darkness to Light: Aspects of Conversion in the New Testament" and "When in Romans: An Invitation to Linger with the Gospel according to Paul."

Gaventa is a past president of the Society of Biblical Literature, the largest professional organization of biblical scholars in the world. She also is a member of the Studiorum Novi Testamenti Societas, the Catholic Biblical Association, the Duodecim Theological Society and the American Theological Society. She has served on the editorial boards of several scholarly journals and is an editor-at-large for Christian Century. She has lectured widely in the United States, Canada, Europe, South Africa and Australia.

She earned bachelor's degrees in English and religion from Phillips University, her M.Div. in New Testament at Union Theological Seminary and her Ph.D. in religion from Duke University.

The College of Arts & Sciences is Baylor University's largest academic division, consisting of 25 academic departments and eight academic centers and institutes. The more than 5,000 courses taught in the College span topics from art and theatre to religion, philosophy, sociology and the natural sciences. Faculty conduct research around the world, and research on the undergraduate and graduate level is prevalent throughout all disciplines. Visit baylor.edu/artsandsciences.