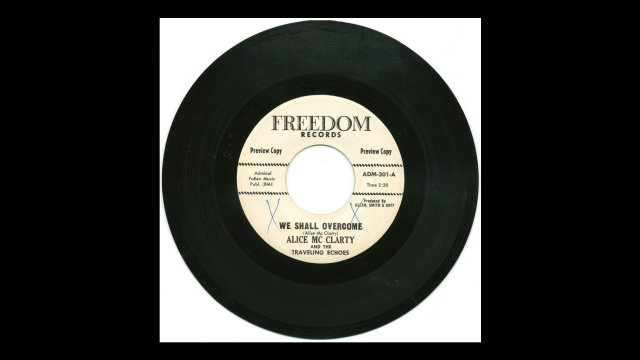 45 of "We Shall Overcome" by Alice McClarty and the Traveling Echoes from the Black Gospel Music Restoration Project at Baylor University.
Tweet
June 19, 2020

WACO, Texas (June 19, 2020) – As the protests following the death of George Floyd began to roil the country, it was only a few days before the demonstrators began to sing an array of freedom songs and protest spirituals, as well as a few new adaptations, including Bill Withers’ “Lean on Me.” Some of these songs have been sung by people fighting nonviolently for freedom and justice for hundreds of years. Many have been sung continually in the United States since the 1800s, right through the #blacklivesmatter and #metoo movements. Others have been adopted by freedom fighters in the Arab Spring, at Tiananmen Square and even now in Hong Kong.

The Black Gospel Music Restoration Project at Baylor University has the world’s largest collection of digitized vinyl songs and sermons from gospel’s “golden age.” Not surprisingly, there are hundreds of freedom songs and protest spirituals in the collection as well.

Below is a list of some of the most influential, most powerful, most enduring and beloved songs that have inspired and encouraged sings for two centuries. Each song is available for listening in the digital collections of the Black Gospel Music Restoration Project. (Assistance provided by Baylor Libraries’ Digitization and Digital Preservation Services.)

When labor unions admitted African Americans in the 1930s and '40s, labor protesters quickly absorbed and adapted the great protest spirituals. These two old union songs were quickly adopted and expanded by the civil rights movement of the '50s and '60s.

Listen to “I Shall Not Be Moved” by the Mighty Wonders of Aquasco, Maryland.

In the days before hymnals, a song-leader would sing or speak a line and the congregation, whether in a church or at a mass meeting, would sing it back, called “lining out.” One of the most popular lined-out hymns during the movement was the old hymn, “A Charge to Keep Have I.”

Listen to “A Charge to Keep” by Betty Simmons.

This old spiritual became a favorite in the great singing protests of Albany, Georgia, and quickly spread throughout the South.

Listen to “Up Above My Head, I Hear Freedom in the Air” by Sister Rosetta Tharpe.

Not all freedom songs were defiant in tone. Some provided comfort in difficult times. Some helped encourage those in despair. This is one of those songs.

Listen to “If I Can Help Somebody” by Dorothy Love Coates and the Gospel Harmonettes from the LP, Till My Changes Come.

Some original songs were composed during the movement that were not only quickly adopted by the civil rights activists, they’ve remained in the repertoire of freedom fighters everywhere. One such song is “Freedom Highway” by the Staple Singers who themselves marched many miles with Dr. Martin Luther King Jr.

Listen to “Freedom Highway” by the Staple Singers.

There are dozens of variations of this civil rights-era favorite. Most include the couplet about Paul and Silas in jail, but all were sung to bolster spirits in tough times.

Listen to “Keep Your Hands on the Plow” by The Famous Ward Singers from the LP on Vista Records.

4. “This Little Light of Mine”

Fannie Lou Hamer made this old children’s song one of the most popular and righteous of the freedom songs. It was easily adaptable to every situation and good for naming the names of your oppressors.

Listen to “The Little Light of Mine” by the Ward Singers.

“99 ½ Won’t Do” was one of the most powerful songs to come out of the Birmingham freedom movement, sung by choirs and soloists alike, and it has since become a staple for many gospel singers, along with “I’m a Soldier in the Army of the Lord.”

Listen to “99 ½ Won’t Do” by the Greater Sabathani Baptist Church Mass Choir.

2. “Don't Let Nobody Turn You Around”

This freedom song has been sung repeatedly during the George Floyd protests – and has been sung for a hundred years or more. It lends itself well to a tone of defiance against great odds and was another freedom song that was infinitely adaptable to the situation.

Listen to “Don't Let Nobody Turn You Around” by the Five Trumpets.

Few songs can match the majesty and soulful power of “We Shall Overcome,” always sung standing, with arms crossed clasping the hands of those on either side. It is at its most powerful -- then and now -- when the lines “black and white together” are included.

Listen to “We Shall Overcome” from the 45 by Alice McClarty and the Traveling Echoes.