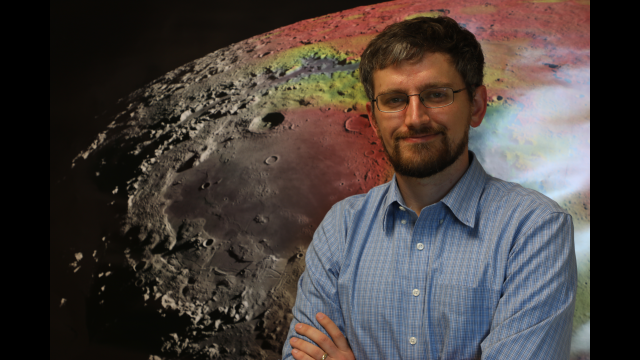 The SpaceX scheduled launch this weekend to the International Space Station is ‘a good first step,’ planetary geophysicist says

WACO, Texas (May 29, 2020) – As private rocket company SpaceX readies for the scheduled launch to the International Space Station on Saturday or Sunday — the first space crew launch from America in nearly a decade — Baylor University planetary geophysicist Peter James, Ph.D., says that private companies not only have lowered the cost of space exploration but also may speed it along.

James, founder of Baylor University’s Planetary Research Group and assistant professor of planetary geosciences, has taken part in three NASA missions* and specializes in using spacecraft data to study crusts and mantles of planets and moons. In a recent study that he led, researchers discovered a huge mass on the Moon’s far side that may contain metal from an asteroid crash.

In this Q&A, he discusses the implications of the upcoming launch.

Q: What’s the significance of SpaceX in the big picture of space exploration, and how does that mesh with what your research group does?

JAMES: Our research at the Baylor Planetary Research Group focuses on the interpretation of instrument data from unmanned spacecrafts. In this arena, private rocket companies like SpaceX have already been a game-changer by bringing the cost of launches way down. In February, NASA announced that SpaceX will provide the launch vehicle for the Psyche mission in 2022, which will orbit an unusual asteroid called 16 Psyche. 16 Psyche is the densest large asteroid in our solar system, so it may be the metal core of a former planet that was shattered long ago. We've never drilled deeper than several miles into Earth, so this will be a unique opportunity to see what the inside of a planet looks like. Lower launch costs will enable many more scientific missions like this, which will be fantastic.

The study of our solar system is sometimes stunted by a loss of continuity. For example, NASA launched the last mission to Venus — called Magellan — in 1989, and an entire generation of scientists associated with that mission has now retired without seeing a follow-up mission. That's a shame because Venus is crucial for understanding Earth's climate and tectonic activity. Neptune and Uranus — the third and fourth largest planets — have never been orbited by any spacecraft. More frequent and more affordable launches will really accelerate the pace of scientific discovery in space.

Q: So uncrewed spacecraft are lower in cost and clearly have been valuable for your research. What are the advantages, despite the risks, of sending a human into space?

JAMES: Uncrewed spacecrafts are certainly cost-effective, but an astronaut with geology training can do the same work 10 times better and 10 times faster. The next men and women who walk on the Moon might install geophysical instruments like seismometers, heat flow probes and gravimeters. Those are tasks that require ingenuity along with a little elbow grease. Launching astronauts to the International Space Station is a good first step, but the next goal will be to launch astronauts beyond low-Earth-orbit, which has not happened since 1972.

Q: I understand you are collaborating with NASA’s Goddard Space Flight Center to study the planet Mercury’s crust. Why the interest in that in particular?

JAMES: Unlike the other planets that are predominantly composed of rock — like Earth — or gas — like Jupiter and Saturn — Mercury is mostly made of metal. That makes it a unique type of planet in our solar system, but there could be many thousands of metal worlds like Mercury orbiting other stars in our galaxy. It’s useful to study abnormal planets like Mercury so that we can understand the full diversity of worlds that might exist, and that’s why we developed our research partnership with Goddard to study gravity data from the recent MESSENGER spacecraft.

On Wednesday, May 27, NASA released a planetary mission concept study for a spacecraft to land on Mercury. If SpaceX keeps bringing down the cost of rocket launches, we might not have to wait decades for this concept to become a reality.

*James served on the science team of the Lunar Reconnaissance Orbiter (LRO), the Gravity Recovery and Interior Laboratory (GRAIL), and the MErcury Surface, Space ENvironment, GEochemistry, and Ranging (MESSENGER) mission.