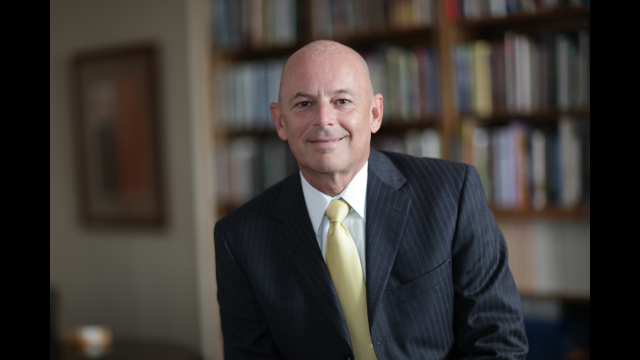 WACO, Texas (May 7, 2020) — Youth aging out of foster care, at-risk single moms and homeless veterans achieved significant life transformation through an intensive, volunteer-based, relationship-focused model, according to a preliminary study of a limited number of participants in the Open Table program conducted by Baylor University’s Program on Prosocial Behavior.

Scholars from Baylor University conducted a case study evaluation of the Open Table program in Richmond, Virginia, involving the engagement of six to eight community-based volunteers, each supporting one of 10 individuals with different economic and emotional challenges. Baylor scholars conducted on-site visits, interviewing Open Table staff, community volunteers and the individuals and young families they served.

This case study is published through Baylor’s Institute for Studies of Religion.

“The Open Table program trains community-based volunteers to provide relational and social supports through weekly meetings with individuals referred to the program who face a variety of needs and challenges for themselves and their children,” said Byron R. Johnson, Ph.D., Distinguished Professor of Social Sciences and founding director of Baylor’s Institute for Studies of Religion. “Beyond a food pantry or a soup kitchen or a clothing closet, this program develops familial relationships, something that is often in scarce supply for these individuals.

“What this case study evaluation helped us to discover is a way for individuals with charitable intentions, who are often frustrated with the limits of more episodic, transactional forms of charity that focus on distributing commodities like food and clothing, to give of themselves in a more personal and direct manner,” Johnson said. “Open Table has taken this idea and developed an intensive training process to help volunteers seeking this type of charity in areas such as active listening and supporting an individual’s need to develop their own life plan.”

Open Table is a unique mutual-support model, established in 2005, in which trained volunteers, identified as Table Members, come alongside a family or individuals in need, referred to as a Friend. By giving of themselves relationally, Table Members pour into the lives of Friends. Table Members commit to meeting once a week for a year with their Friend, providing support by helping them develop and implement their own plan, with the Table Members tapping into their own social networks in support of that plan. This approach has attracted a total of 3,949 volunteer participants through Tables that served 418 individuals and families in 29 states and districts across the United States from 2014-2019.

In this Q&A, co-authors Johnson and ISR non-resident fellow William Wubbenhorst explain the unique and distinct elements of Open Table they discovered through the case study development.

Q: Robert Putnam, in his best-selling book Bowling Alone, argues that society needs to revisit new and innovative ways to rebuild America’s depleting social capital. How does this program fit into that vision?

Johnson: One can readily argue that Open Table is exactly the kind of response Putnam was calling for by renewing our commitment to be engaged, civically involved and intentionally connected to each other in reciprocal and reinforcing ways. We find evidence in this case study that Open Table is a new and promising model for replenishing and hopefully reversing the trend of America’s dwindling supply of social and relational capital by drawing upon the spiritual capital found within so many faith-based organizations on the front lines.

Q: How are Open Table engagements different from how these individuals are currently served and supported by local, state and federal human services agencies?

Wubbenhorst: Open Tables do not replace social workers or case managers per se. They represent a missing piece of the human/social services system: supportive relationships and access to long-term social networks and resources, including aftercare. Aftercare refers to providing supports in the community to which these individuals in many cases are transitioning into, as in the case of foster youths who are aging out of the system, or are already in the community but lacking family and friends to support them in their efforts to become more stable and financially independent. Whether an individual/family is being discharged from a drug treatment, mental health treatment, homeless shelter/transitional housing, prison, etc., they often return to the community without the social networks we all utilize as part of our efforts to sustain and grow in our lives.

Open Table Members have the opportunity to engage their “Friends” in a more personal and consistent manner than is possible for caseworkers, who often juggle large caseloads and are actually discouraged through codes of conduct from their particular professional association, from becoming overly engaged with their “clients.”

Q: What kind of outcomes and impact did you observe from the eight participating Table ‘Friends’ included in your study a year later?

Wubbenhorst: The changes associated with estimated public program cost savings for these eight friends are as follows:

Based on research demonstrating the public costs associated with these outcomes, there was an estimated $915,806 in future public program costs avoided and additional tax revenues generated through increased lifetime earnings. Compared to an estimated annual cost of $44,300 for Open Table implementation and administration, this results in an estimated return on investment of $20.07 for every $1 invested in the Open Table program.

Q: Will you do future research related directly to social support programs like Open Table?

JOHNSON: Yes, we plan to continue to research the Open Table program, and others like it, in order to increase awareness of the central importance of social supports and social networks as part of an overall framework for helping those most vulnerable with something beyond a bag of groceries or clothing or furniture. People need people, and those lacking in social capital gain friends and a sort of family with their Table Members that often goes well beyond the one-year formal engagement and commitment of these volunteers.

ABOUT THE PROGRAM ON PROSOCIAL BEHAVIOR

The Program on Prosocial Behavior emphasizes the neglected “half” of human behavior. For example, why do so many people generously give money to help those in need? Or, why do most of the people reared in “bad” neighborhoods turn out not only to be law-abiding but to be good citizens? Indeed, how are people transformed from antisocial patterns of behavior to positive patterns? In keeping with the overall mission of the Baylor University Institute for Studies of Religion, the role of religion in promoting prosocial behavior is of central concern — not only the role of religiousness in guiding individual behavior but the role of faith-based groups and organizations in fostering prosocial activities.