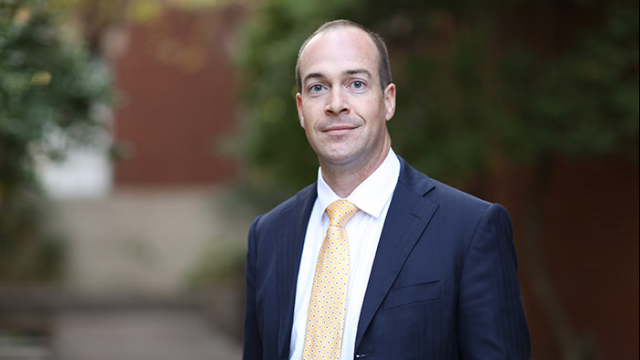 Douglas V. Henry, Ph.D., who has served since last summer as Interim Dean of the Honors College at Baylor University, will begin serving as Dean in an official capacity, beginning May 1.
Tweet
April 8, 2020

WACO, Texas (April 8, 2020) – Baylor University Provost Nancy Brickhouse, Ph.D., announced today that Douglas V. Henry, Ph.D., who has served since last summer as Interim Dean of the Honors College, has been selected to serve as Dean in an official capacity, effective May 1.

Henry succeeds Thomas S. Hibbs, who is now president of the University of Dallas.

“Dr. Henry will continue the strong legacy of the Honors College in providing students with a transformative education while also supporting Baylor’s drive to elevate the significance of our scholarship and our Christian witness in the world,” Brickhouse said. “I express my sincerest appreciation to the Honors College Dean Search Committee, chaired by Baylor Law School Dean Brad Toben, for their valuable time and service to the University during this nationwide search process.”

Henry said he is grateful for the steadfast support of transformative undergraduate education by Baylor President Linda A. Livingstone, Ph.D., and Provost Brickhouse.

“I share their commitment to the highest caliber of stewardship for the Honors College, one of the many bright spots of mission-driven excellence at Baylor,” Henry said. “I am humbled at the opportunity to serve my colleagues and students as dean. I’m also eager to do everything I can to help us rally around bold aspirations. Those aspirations rightly find their source and end within our Honors College vision: to love truth, kindle faith and cultivate virtue in friendship, study and service to Christ and neighbor.

“I anticipate great years ahead as I serve with exemplary faculty and staff to recruit the finest undergraduates anywhere to be found, collaborate with colleagues across campus in providing a deeply Christian education and celebrate as our alumni lead, serve and bear witness in all the ways the University mission envisions,” he said.

Before his service as interim dean, Henry had served since 2012 as associate dean of the Honors College, with responsibilities for academic administration, enrollment management and scholarships. He also served as acting dean during the fall 2018 semester. He has taught students in all four of the Honors College programs in courses covering everything from Homer’s Iliad to 21st-century great books such as Marilynne Robinson’s Gilead and Cormac McCarthy’s Road.

Henry received his B.A. in religion from Oklahoma Baptist University and an M.A. and Ph.D. in philosophy from Vanderbilt University. In 2001, he joined the Baylor faculty, serving as associate director and later director of Baylor’s Institute for Faith and Learning. He served six years as faculty steward of Brooks Residential College, providing comprehensive leadership to residents as a live-in faculty member, along with his wife, Michele L. Henry, Ph.D., professor of choral music education and director of the music education division in the Baylor School of Music, and son, Zachary. He co-directed the Baylor in Turkey and Greece summer study abroad program from 2011-19 and serves as a mentor for the Lilly Graduate Fellows Program, a national initiative supporting Ph.D. students interested in teaching in church-related higher-education.

Henry’s scholarly work has addressed such varied writers as Plato, Boethius, John Bunyan, Iris Murdoch, Walker Percy, John Paul II and Benedict XVI and diverse topics, including allegory, divine hiddenness, doubt, freedom, hope and love. His interest and understanding of American higher education, and especially church-related colleges and universities, is reflected in three books he co-edited on the subject: Faithful Learning and the Christian Scholarly Vocation, Christianity and the Soul of the University: Faith as a Foundation for Intellectual Community and The Schooled Heart: Moral Formation in American Higher Education.