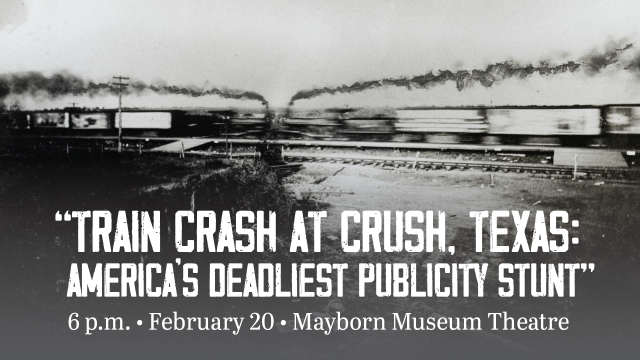 WACO, Texas (Feb. 18, 2020) – On Sept. 15, 1896, a staged head-on collision between two locomotives – known as the “Crash at Crush” – had both disastrous and unexpected consequences, as injuries, deaths and professional trajectories were impacted by the publicity stunt.

To explore the crash and its aftereffects, The Texas Collection at Baylor University will host Mike Cox, author of the recently released book “Train Crash at Crush, Texas: America’s Deadliest Publicity Stunt,” for a lecture and book signing from 6 to 8 p.m. Thursday, Feb. 20, at the Mayborn Museum Theater, 1300 S. University Parks Drive.

The lecture, which is free and open to the public, will examine the publicity stunt put on by William George Crush that occurred three miles south of West, Texas, in Crush, a made-up city for the day of the collision. While the public was assured that the trains’ boilers would not burst upon impact, unfortunately that is exactly what happened. After the collision, shrapnel and other flying debris were sent into the crowd of 40,000 spectators, killing two and injuring many more.

The “golden age” of railway expansion in Texas started in the 1870s. Nearing the turn of the century, railroads were still somewhat novel in Texas and any railroad event was sure to be an attention-getter, said Bradley Linda, an academic consultant with Baylor Libraries’ academic technology and learning spaces and a railroader in his spare time.

“W.G. Crush capitalized on the curiosity of the public for such events, and while the event propelled the Crush and the Missouri-Kansas-Texas Railway to fame, the unfortunate human toll was a reminder that we should have a healthy respect for the iron horse,” Linda said.

The Texas Collection holds clear copies of the original, 124-year-old photographs of the collision taken by Jarvis Deane, who ran a Waco photography studio with his brother on Austin Avenue in the late 19th century. Deane did not walk away unscathed from the collision, however, losing an eye from being struck by a flying piece of scrap iron.

John Oscar Birgen Johnson’s copies of the Deane photographs were obtained by The Texas Collection in in the 1980s and were of much higher quality than the Fred Gildersleeve copies originally held in Baylor’s collection.

“Johnson’s copies are helping us understand more about the accident itself,” said Geoff Hunt, audio and visual curator of The Texas Collection, about the importance of having clear copies of the original photos. “They are a huge contribution and a valuable addition to The Texas Collection.”

While it has been more than a century since “Crash at Crush” took place, Amie Oliver, assistant librarian and associate director of The Texas Collection, said that many library researchers still inquire about this intriguing part of McLennan County history.

“We hope the lecture dispels some of the myths and misinformation surrounding the event and that attendees will learn the whole story from Mike Cox, who wrote the first book about the Crash at Crush,” she said.

Refreshments as well as an opportunity to purchase the book will follow the lecture. For more information about the event, please visit www.baylor.edu/lib/events.

The Baylor University Libraries lead as an innovative research library that undergirds scholarship, fosters teaching and learning, and builds communities. Comprised of the Central Libraries and world-renowned special collections that include the Armstrong Browning Library, The Texas Collection and University Archives, The Institute for Oral History, the Keston Center for Religion, Politics, and Society, and the W. R. Poage Legislative Library, the Libraries drive research at Baylor University and beyond.