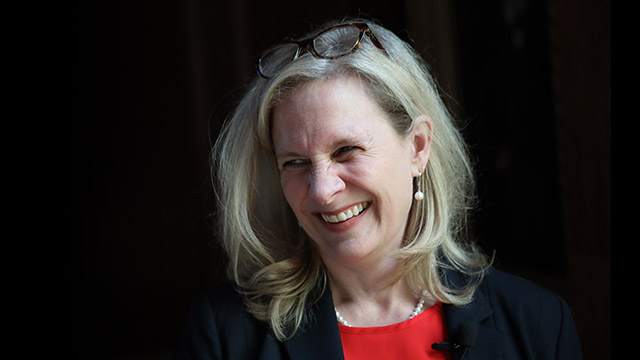 The Cherry Award is a prestigious national teaching award – with the single, largest monetary reward of $250,000 presented by a college or university to an individual for exceptional teaching. The award program is designed to honor great teachers, stimulate discussion in the academy about the value of teaching and encourage departments and institutions to recognize their own great teachers. Along with a record of distinguished scholarship, individuals nominated for the Cherry Award have proven themselves as extraordinary teachers with positive, inspiring and long-lasting effects on students.

As the 2020 Cherry Award recipient, Cognard-Black will receive the $250,000 award and an additional $25,000 for the English department at SMCM. She is expected to teach in residence at Baylor during the Fall 2020 semester.

Cherry Award finalists Nancy Fichtman Dana, Ph.D., professor of education at University of Florida, and Reuben A. Buford May, Ph.D., Presidential Professor for Teaching Excellence and professor of sociology at Texas A&M University, each received $15,000, while their home departments also received $10,000 for the development of teaching skills.

“The selection committee for the Robert Foster Cherry Award for Great Teaching was very pleased to receive a record number of nominations for the 2020 award. Each of the three finalists had successful campus visits in the fall, during which they were able to present a public lecture and guest lecture in two undergraduate classes offered by their host departments,” said Michael W. Thompson, Ph.D., committee chair and associate dean for undergraduate programs in Baylor's School of Engineering and Computer Science. “Dr. Jennifer Cognard-Black stands out in her ability to inspire and nurture students. Her ‘Just Food’ courses transcend the classroom and provide an excellent model of service-learning. We look forward to her residency at Baylor.”

“I am both humbled and honored to be selected as the winner of the 2020 Cherry Award for Great Teaching,” Cognard-Black said. “As a lifelong collaborator and someone with a deep interest in the pedagogy of empathy, it is my hope that I may use my time at Baylor to work side-by-side with students, community partners and faculty across campus to develop academic projects that ultimately help others in real and lasting ways.”

Cognard-Black visited Baylor in October of 2019 to present her Cherry finalist lecture, “Just Food: Social Justice and the Literatures of Food.” She said she appreciates Baylor’s focus on teaching and looks forward to returning to campus.

“I am deeply grateful that Robert Foster Cherry established this program to recognize excellence in teaching – and to bring professors from around the world to Baylor to collaborate with students on making meaning,” Cognard-Black said. “To me, the Cherry Award reminds us all that teaching matters; that each and every one of us is indebted to those educators and mentors who changed us utterly – who awakened us to ourselves.”

Cognard-Black was named a Senior Fulbright Scholar in American Culture to the University of Amsterdam, the Netherlands, for Spring 2020. She also was a Fulbright Scholar to University of Ljubljana, Slovenia, in 2012. She has served as Artist-in-Residence at the Virginia Center for the Creative Arts and at the Kimmel Harding Nelson Center for the Arts. She has received 12 faculty development grants from SMCM as well as two Internationalization and Teaching and Learning Grants (2011 and 2016), and she has been given the highest honor for teaching that SMCM students bestow, the Faculty-Student Life Award, at three distinct times during her career (2002, 2009, and 2019).

Cognard-Black has authored numerous peer-reviewed articles, teaching guides, book reviews and critical and creative works, including two edited collections of both food writing and personal essays by women as well as a critical monograph and a writing textbook. Two of her short stories have been nominated for the Pushcart Prize. Her interest areas include women writers, images of women in popular culture, the literatures of food, the Anglo-American novel, Victorian adaptations and Gothic monsters. Her books include “Narrative in the Professional Age” (2004); “Kindred Hands” (2006); “Advancing Rhetoric” (2006); “Books that Cook: The Making of a Literary Meal” (2014); and “From Curlers to Chainsaws: Women and Their Machines” (2016). With The Great Courses, Cognard-Black produced a lecture series on "Becoming a Great Essayist" (2016) and one just released in the fall of 2019 on "Great American Short Stories."