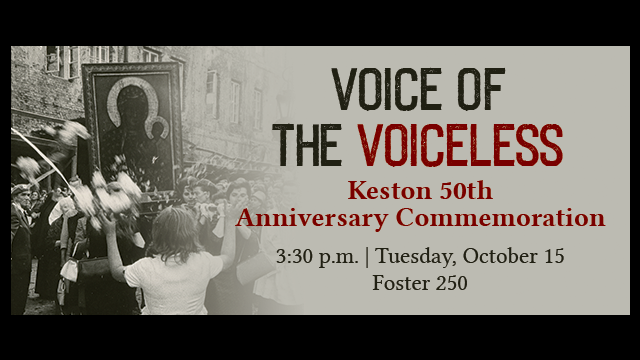 WACO, Texas (Oct. 14, 2019) – In 1969, at the height of the Cold War, a group of British Christian researchers and activists, moved by the persecution of believers in the Soviet Union, established an organization dedicated to the study of religion under communism. They had two major goals: to educate the public about religious persecution and to promote academic analysis of religion in communist societies.

On Tuesday, Oct. 15, the Keston Center for Religion, Politics and Society at Baylor University – a rich archive of collected and reported information about people facing religious persecution in the Soviet Union and other communist countries – will commemorate the 50th anniversary of the founding of the Keston Institute at 3:30 p.m. in Room 250 of the Paul L. Foster Campus for Business and Innovation, 1621 S. Third St. on the Baylor campus. The commemoration includes a speed panel, book signing and reception.

Keston founder the Rev. Canon Michael Bourdeaux will bring greetings from his home in Oxford, followed by nine “speed panelists,” who will have three minutes to present an item from the Bourdeaux Research Center. Speakers include Susan Chandler, director of the Czech Heritage Museum and Genealogy Center in Temple, seven Baylor faculty members and a Baylor Ph.D. candidate.

“The intent of the book is to showcase the many types of materials in the archive. In one essay, you might encounter cutting-edge research, while in another you listen to the reminiscences of a person who was part of the Keston News Service in its heyday,” deGraffenried said. “They are connected by this unique collection, which is meaningful to all who contributed to the book.”

Larisa Seago, curator for the Keston Center, noted that the Keston archive was an invaluable resource that kept the world informed about the true lives of believers in communist countries – stories that were neglected by official Soviet information that did not mention anti-religious campaigns or religious persecution.

“Without this collection, the Western public, who took for granted their ability to openly profess faith, would have never learned that many people for many years had to fight for their right to believe,” Seago said. “The archive adds to Baylor’s rich holdings on the history of Christianity, as well.”

After the presentations, guests may purchase the book and have it signed. Attendees also are invited to a reception with English tea-themed refreshments.

“Anniversaries are times to look back and to look forward,” said Kathy Hillman, director of the Keston Center for Religion, Politics and Society. “It’s our hope that attendees will take away an appreciation for religious freedom and understand the role that Keston played for those who suffered under religious persecution.”

For more information about this event, please visit www.baylor.edu/kestoncenter/keston50. To learn more about or purchase Voices of the Voiceless: Religion, Communism and the Keston Archive, visit the Baylor Press website.

ABOUT THE KESTON CENTER FOR RELIGION, POLITICS AND SOCIETY

Founded in England in 1969 by the Reverend Canon Michael Bourdeaux and Sir John Lawrence to be the “voice of the voiceless,” the Keston Institute collected and reported information about people facing religious persecution in the Soviet Union and other communist countries. Baylor acquired Keston’s rich archive and established the Keston Center for Religion, Politics and Society in 2007. The Keston Center officially became part of the University Libraries in 2012.

The Baylor University Libraries lead as an innovative research library that undergirds scholarship, fosters teaching and learning, and builds communities. Comprised of the Central Libraries and world-renowned special collections that include the Armstrong Browning Library, The Texas Collection and University Archives, The Institute for Oral History, the Keston Center for Religion, Politics, and Society, and the W. R. Poage Legislative Library, the Libraries drive research at Baylor University and beyond.