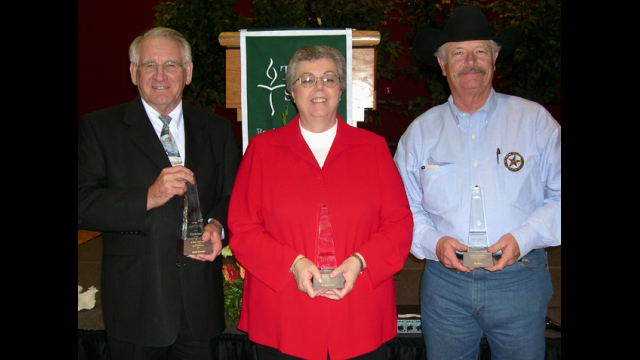 The dinner and awards presentation were held in conjunction with the annual meeting of the Baptist General Convention of Texas.

Ron Nolen, well known as a "Cowboy Church" starter but officially identified as a statewide consultant for Western Heritage church planting with the BGCT's Church Multiplication Center, was honored with the George W. Truett Award for Ministerial Excellence.

In March 2000, Nolen started Cowboy Church of Ellis County, which baptized 600-plus new Christians in four years and averages 1,100 people in worship. In October 2001, he started Frontier Church of Ellis County, which attracts 220 worshippers and recently moved into its new building. Last March, he started The Ranchhouse Cowboy Church in Maypearl. He also launched Ranchhouse School of Cowboy Church Planting and trained more than 350 people in three schools this year; he plans four schools next year.

Others have patterned churches after Nolen's Cowboy Church model, and it's become one of Texas Baptists' most successful ministry ventures. His approach to church starting and lifestyle ministry has been chronicled in USA Today, Christian Century, Horse Talk Magazine and the Baptist Standard.

The George W. Truett Award for Ministerial Excellence recognizes a Texas Baptist Minister, in any area of specialization, for a singular ministry achievement in the recent past. Achievements meriting consideration combine and exemplify imagination, leadership and effectiveness. The award is named for Truett, the legendary pastor of First Baptist Church of Dallas, who was a driving force in Texas Baptist life in the first half of the 20th century.

The W. Winfred Moore Award For Lifetime Ministry Achievement was presented to Charles Davenport, the pastor at First Baptist Church of Tulia since 1974.

Davenport's innovative leadership has influenced First Baptist to serve its community in new and different ways, including a Monday night service and Sunday Bible study class at a local prison and a Bible correspondence course that enrolls about 125 inmates. Each inmate who completes the 33-week course receives a new Bible and certificate from the church. For about six years, First Baptist of Tulia has provided a Tuesday night Bible program designed especially for children who do not attend church regularly. It also has opened its doors to New Fellowship Baptist Church, a growing African-American congregation. On Oct. 31, First Baptist launched its newest venture, a truck-stop ministry.

Davenport has participated in more than 20 mission trips to Brazil and numerous trips to Mexico, as well as China and Australia. He also has provided leadership to the Baptist General Convention of Texas, serving as first vice president, chairman of the BGCT Administrative Committee and vice chairman of the BGCT Executive Board. He is a trustee of Wayland Baptist University and has been a trustee of High Plains Baptist Hospital. He has served on the BGCT Christian Education Coordinating Board and the Baptist Convention of New Mexico's Executive Board, as well as in associational positions and on state committees. He has been a member and leader of numerous local ministry and civic organizations. He has taught at Amarillo College and Wayland Baptist University.

A native of Amarillo, Davenport is a graduate of West Texas State University and Southwestern Baptist Theological Seminary. Before arriving in Tulia, he was pastor of Dawn Baptist Church in Dawn and the First Baptist churches of Streetman, Claude and Tucumcari, N.M.

Davenport and his wife, Valoise, have been married for 48 years. They are have two sons, Kevin Wayne Davenport and Keith Alan Davenport; a daughter, Kristi Valoise Rackley; and five grandchildren.

The W. Winfred Moore Award for Lifetime Ministry Achievement recognizes a Texas Baptist minister, in any area of specialization, for a lifetime of achievement in ministry. A minister meriting consideration should have a cumulative record of service that exemplifies commitment, stability and effectiveness. Moore, longtime pastor of First Baptist Church of Amarillo, exemplifies lifetime achievement in ministry because of his presence, perseverance, preaching and practice of the Christian faith.

Dr. Gaynor Yancey, an assistant professor in Baylor's School of Social Work, was recognized with the Marie Mathis Award for Lay Ministry.

Shortly after earning a master's degree from Southwestern Baptist Theological Seminary, Yancey moved to Levittown, Pa., where she taught school. She found her true calling as a missionary with the Southern Baptist Home Mission Board, working in the urban heart of Philadelphia and nearby Camden, N.J.

Board leaders asked her to create a church-and-community ministry "within a congregational building without an existing congregation." So, she taught members of other churches to live out their faith in action, by ministering to the region's poorest people. Together, they offered a wide range of ministries, from literacy classes and skills training, to self-support groups and hunger relief, as well as pregnancy programs, drug and alcohol training, after-school tutoring, health clinics, age-level programs for senior adults and preschoolers, recreation, and support for AIDS patients. As a recognition of her efforts, she was the first recipient of the Clovis Brantley Award for outstanding service in Christian social ministries in the United States.

Later, Yancey became president of the Greater Philadelphia Food Bank. Under her leadership, the agency progressed from operating at a $200,000 annual deficit to a $500,000 surplus. She also was an adjunct professor and then an assistant professor at Eastern University in St. Davids, Pa.

Since 1999, she has served on the Baylor social work faculty, teaching in the graduate program and directing the baccalaureate program. In addition to Southwestern, Yancey earned degrees from East Texas Baptist University, Temple University and the University of Pennsylvania. She wrote her doctoral dissertation on the role of churches as social service providers.

She is a native of England but grew up in Pasadena. She is a member of First Baptist Church of Woodway.

The Marie Mathis Award for Lay Ministry recognizes a Texas Baptist layperson for a recent singular or lifetime ministry achievement. A layperson meriting consideration should have achievements that combine and exemplify imagination, leadership and effectiveness or whose cumulative record of service exemplifies commitment, stability and effectiveness.

Marie Wiley Mathis served the staff of the First Baptist Church of Dallas for four years, followed by 25 years as director of Baylor's Student Union. She also served as president of Texas Woman's Missionary Union and two terms as president of the SBC WMU, and led the Women's Department of the Baptist World Alliance.