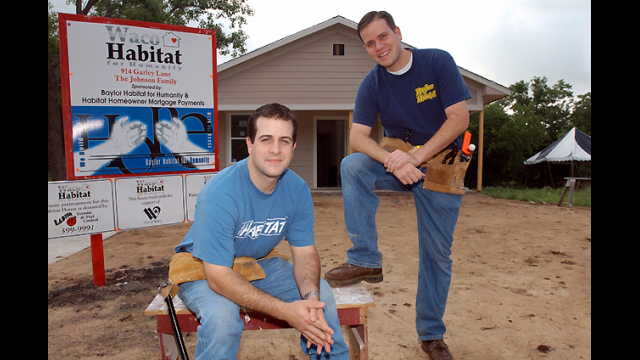 Eric Green (standing) with twin brother Adam in front of a Habitat for Humanity house where they both worked
Tweet
Oct. 25, 2004

Dr. Jim Farison, professor and chair of the department of electrical engineering, said Green had made significant contributions to the department, as well as to Baylor's chapter of Eta Kappa Nu.

"He has been an outstanding student in electrical engineering, already a demanding program, but he has also incorporated both the Baylor Interdisciplinary Core (BIC) and the University Honors program. One of his additional contributions to our engineering student body was to bring the observance of the national Order of the Engineer ceremony to our department last year," Farison said.

Green also was recognized as the spring 2004 outstanding student in engineering at Baylor. As he finishes his undergraduate degree with a math minor, he has begun work on a master's degree in biomedical engineering.

HSSSRFP is designed to reach exceptional high school students between their junior and senior years of high school to introduce them to Baylor, promote science and math careers and whet appetites for research.

Eric has served in Baylor's chapter of Habitat for Humanity for three and a half years, where, in addition to building houses for several Waco families, he has served as the webmaster and communications liaison officer. He also is a Carr P. Collins Scholar and a Regents Scholar. He is a member of Golden Key National Honor Society, Gamma Beta Phi and Alpha Chi National College Honor Society and was selected to represent Baylor in Who's Who Among American Colleges Students. He is a founding officer of the Baylor chapters of Eta Kappa Nu and the National Society of Collegiate Scholars.

As a corresponding member of the Institute of Electrical and Electronics Engineers Intellectual Property Committee, Green submits his opinions for review by the policy-making committee. Green also has published several articles in Today's Engineer and other scholarly journals.

"Eric already has significant off-campus professional experiences. We are delighted by his recognition nationally by Eta Kappa Nu. He is an outstanding person, and we are pleased that he is continuing with us in our recently approved master's program," said Farison.