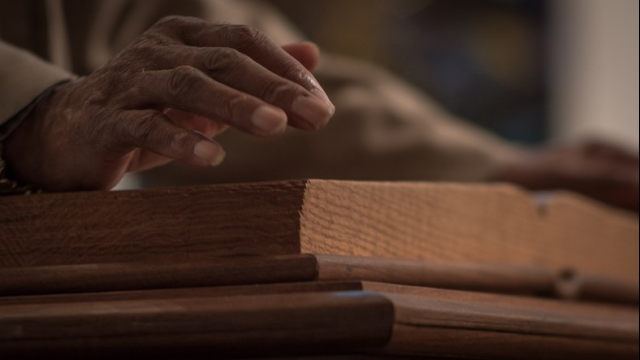 In the past few years, Baylor journalism professor and former Billboard gospel music editor Robert Darden and a team from the Baylor Libraries have undertaken the project of restoring and preserving recorded sermons from black preachers in addition to the gospel music. While both are equally important to preserve, finding sermons to preserve comes with a unique set of challenges.

Darden said the idea for preserving sermons started about four years ago, when the BGMRP team was in contact with the daughter of the Rev. Dr. Marvin Griffin, former pastor of New Hope Baptist Church in Waco. Griffin was a renowned Civil Rights leader in Central Texas and boasts a list of significant firsts, including first black man to earn a degree from Southwestern Baptist Theological Seminary and first African-American president of the Austin Independent School District board of directors. Darden said somebody mentioned in passing that they kept Griffin’s sermons and said he ought to hear them because they are full of music.

“All black preachers sing, and all black singers preach,” Darden said. “That got me thinking – nobody has been collecting the black preaching from the Civil Rights movement, other than Dr. King. All these incredible heroes who were preaching around the rest of the country, there’s not a collection of their work. So, I met with the other folks in the Black Gospel project, and we agreed that in addition to the music, we ought to be trying to collect preaching.”

Many of these sermons had been recorded on vinyl, and Darden said some have even speculated that it was black preaching that started black gospel music in the 1930s. He said some records that were just a black preacher preaching for two and a half minutes on each side sold half a million copies – even during the Great Depression.

When the BGMRP was founded in the Baylor Libraries in 2005, the bulk of incoming materials focused on recorded gospel music. Over the ensuing decade, the BGMRP team realized they already had hundreds of vinyl LPs from famous preachers in their collection. Shortly after, they started receiving sermons in many different formats. Darryl Stuhr, associate director of the Libraries’ digital preservation services, consulted with Darden and together they decided they needed a collection to show to preachers and their families who were not familiar with the projects, in hopes of convincing them to trust the project with their sermons long enough to digitize them.

Darden worked with two in particular – the Rev. E.E. Jones in Shreveport, Louisiana, and the Rev. Clay Evans in Chicago, who is still preaching at 93-years-old.

“Evans) was one of only two preachers who helped Dr. King in Chicago during those really rough times, and they had collected video cassettes of him back into the ‘70s,” Darden said. “That’s the good news. The bad news is they kept them in unairconditioned or unheated warehouses.”

Darden said the BGMRP spent lots of money getting these cassettes stabilized enough to play them even just one time so they could be digitized. Using technology at the Libraries’ Riley Digitization Center, audiovisual digitization staffers Stephen Bolech, Travis Taylor and Hannah Engstrom are able to rescue the recorded sermons from other formats as well, including videocassette, film and digital audio tape. The wide range of formats the BGMRP team can work with means a greater number of sermons can be saved, Stuhr said.

“They’re not all in the best condition, but they’re just thrilling because (Evans’ church) is one of the largest historic African-American churches in just full 1970s regalia. We got (Jones and Evans) and we’ve been using those to approach other preachers and their families now. This is already the largest collection in the country, and we just started,” Darden said.

Recently, Darden got a call from PBS. Dr. Henry Louis Gates of the TV series “Finding Your Roots,” whom Darden quotes in his books, will have new six-part series on the history of African-American churches in America debuting in 2020. Darden said they contacted him about providing materials for the show and contacts of people. The BGMRP already has made hundreds of copies for PBS and is communicating about how they can help.

“I’m hoping they’re going to come down and do some filming here as well, because a lot of the stuff we have is old bulletins and the sheet music – we just have everything. Sure, we can digitize it, but if they came down, they could array it in such a way from an artistic standpoint,” Darden said.

Darden got together with some of the “preaching folks” at Baylor and put together a top 10 wish list of influential black preachers of the past 50 years whose sermons they would like to digitize.

“I just think God put me in a place where I could facilitate, rather than me initiate, and it was God’s idea apparently, because it wouldn’t have worked this well otherwise,” Darden said.

Darden said new vinyls continue to come in every few days, and it is like Christmas for him to go see what is new.

“I don’t mind not knowing every artist or every preacher – there’s hundreds and thousands of them,” he said. “But what scares me is when I pull a piece of vinyl out and it’s a label that I don’t know, which means there’s another whole line of that label that we’ve never heard of. So here we’re sitting 15 or so years into this project, and I don’t know if we have 1 percent of what’s out there – 10 percent? There’s no database. Nobody knows.”

“It’s unlike every other kind of music. Nobody ever made a discography of gospel music,” Darden said. “So, whether we mean to or not, we’re actually putting that together as well. Trying to figure out how many Andraé Crouch albums, how many James Cleveland, how many Rosetta Tharpe, and now with preaching, it could go on forever. It’ll be going, hopefully, long after I’m gone.”

For more information or to learn how to donate materials, visit the Black Gospel Music Restoration Project at www.baylor.edu/library/gospel or email digitalcollectionsinfo@baylor.edu.