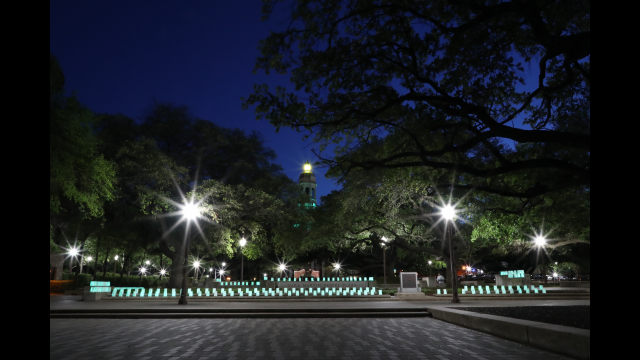 On Friday, April 26, during a Continuous Commitment: Night of Reflection, Baylor University will light up several campus and community landmarks in teal â the color that symbolizes sexual violence prevention - including the I-35 bridges, McLane Stadium, Pat Neff Hall and Fountain Mall in the center of campus, which will be illuminated with teal luminaries. (Matthew Minard/Baylor University)
Tweet
April 1, 2019

Awareness, prevention efforts include Night of Reflection campus light-up, “What Were You Wearing, Waco?” exhibit, M.A.R.S. lunch series and more

During April, Baylor will provide several opportunities for students, faculty and staff to join the University’s commitment to a safe and healthy campus, the prevention of acts of sexual violence and to treat all members of the campus community with dignity and respect.

The powerful art exhibit, “What Were You Wearing, Waco?,” which features 18 stories of sexual violence and representations of what each victim was wearing at the time of their assault, will be displayed at various campus locations from 8 a.m. to 5 p.m. April 8-28.

The art project was created in 2013 by Jen Brockman, the director of the Sexual Assault Prevention and Education Center at the University of Kansas, and Dr. Mary A. Wyandt-Hiebert, who oversees all programming initiatives at the University of Arkansas’ rape education center. The exhibit, which focuses on the questions often asked of survivors of sexual violence and shares the message that survivors are not responsible for their assault no matter what they were wearing, has been featured across various college campuses.

Cover the Cruiser, Fountain Mall. Students can leave notes offering support for survivors on a University police cruiser all day on Fountain Mall.

Faculty Panel for Sexual Violence Response, 6:30 to 8:30 p.m., Foster 143. This panel for Baylor faculty members will focus on responsibilities and awareness and prevention efforts at the University.

Dr Pepper Hour, 3 p.m., Barfield Drawing Room. In partnership with Student Government Association, the event will include the “What Were You Wearing, Waco?” exhibit and information and resources available from Baylor’s Title IX Office.

Continuous Commitment: Night of Reflection, 8 to 9 p.m., Rosenbalm Fountain, Fountain Mall. For Night of Reflection, the University will light up several campus and community landmarks in teal – the color that symbolizes sexual violence prevention. The lighted landmarks include the I-35 bridges, McLane Stadium, Pat Neff Hall and Fountain Mall in the center of campus, which will be illuminated with teal luminaries.

Student volunteers play a pivotal role in shaping programs and awareness events hosted by the University. To volunteer to be a part of the It’s On Us BU Student Group or for more information about resources and training available through Baylor’s Title IX Office, contact the Title IX staff at 254-710-8454 or TitleIX_Coordinator@baylor.edu or go online at www.baylor.edu/TitleIX.