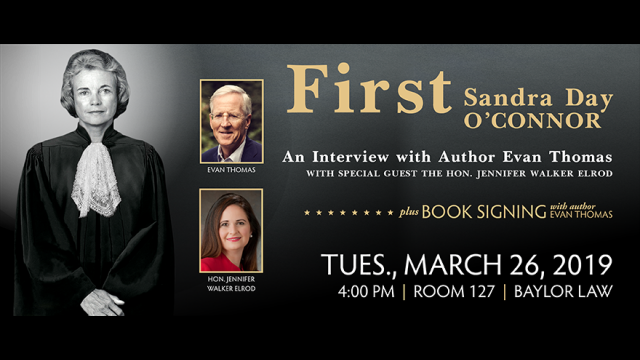 Elrod, a Baylor University Regent, will lead a Q&A with Thomas at 4 p.m. in room 127 at the Law School, 1114 S. University Parks. The event is free and open to the public.

“In ‘First,’ Evan Thomas clearly illustrates how Justice O’Connor broke new ground as an elected official and Supreme Court Justice,” said Stephen Rispoli, assistant dean of student affairs and pro bono programs at Baylor Law. “She is an inspiring model of leadership and an example of dedication and service to one’s country. Hearing from Thomas and Judge Elrod as they discuss Justice O’Connor’s extraordinary life and accomplishments is a unique opportunity that shouldn’t be missed.”

When President Ronald Reagan appointed O’Connor as the first female justice to the U.S. Supreme Court in 1981, she began a pioneering quarter-century on the bench, hearing cases that ultimately advanced and defined American law.

“I wanted to find out what it took to be the first ever woman on the U.S. Supreme Court,” Thomas said. “What I found was a surprisingly human story of a tough ranch girl who had to overcome Ivy League snobs, cancer and her husband's Alzheimer's. She is a lesson in leadership and character.”

Thomas’ biography draws on exclusive interviews and first-time access to O’Connor’s personal archives. The Law School conversation will focus on O’Connor’s life, career and the book.

“As an inspiration figure in the legal profession for decades, our hope is that law students and lawyers look to her example of courage and determination to make a positive impact on our country,” Rispoli said.

A book signing of “First: Sandra Day O’Connor” will follow the event, and it is free and open to the public.

Established in 1857, Baylor Law was one of the first law schools in Texas and one of the first west of the Mississippi River. Today, the school has more than 7,500 living alumni. Accredited by the American Bar Association and a member of the Association of American Law Schools, Baylor Law has a record of producing outstanding lawyers, many of whom decide upon a career in public service. Baylor Law boasts among its notable alumni two governors, members or former members of the U.S. House of Representatives and the U.S. Senate, two former directors of the FBI, U.S. ambassadors, federal judges, justices of the Texas Supreme Court and members of the Texas Legislature. In its law specialties rankings, U.S. News & World Report ranked Baylor Law’s trial advocacy program as one of the top 5 in the nation. Baylor Law School also is ranked No. 50 in the magazine’s 2019 edition of “America’s Best Graduate Schools.” The National Jurist ranks Baylor Law as one of the “Best School for Practical Training” and No. 4 in the nation in its most recent “Best Law School Facilities” listing. Business Insider places Baylor Law among the top 50 law schools in the nation. Baylor Law School received the 2015 American Bar Association Pro Bono Publico Award, making it only the third law school in the nation to be honored with the award since its inception in 1984. Learn more at baylor.edu/law.