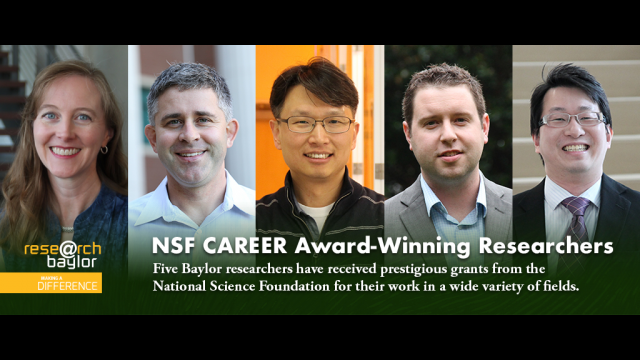 
WACO, Texas (Oct. 3, 2018) – From the latest life-saving medical devices and therapies to the electronic wizardry literally at our finger tips on a smartphone, technology clearly plays a huge role in a rich quality of life for all to enjoy. That’s a fact well understood by decision-makers at the National Science Foundation (NSF) which, together with the National Institutes of Health, Department of Energy, Food and Drug Administration and other federal agencies, supplied 44 percent of all funds spent nationally on basic research in 2017.

While NSF supports researchers at every level of experience, the agency places a high priority on cultivating the work of promising scientists, technologists, engineers and mathematicians through Early Career Development Grants, known collectively as CAREER grants, which typically are awarded over five years.

In 2009, Lorin S. Matthews, Ph.D., professor of physics in Baylor’s College of Arts & Sciences, was a young astrophysicist studying dusty plasmas at CASPER, Baylor’s Center for Astrophysics, Space Physics and Engineering Research, where today she serves as associate director. Her CAREER grant proposal, “Charging and Coagulation of Dust Grains in Astrophysical and Laboratory Environments,” caught the attention of NSF reviewers, netting her a $437,000 grant to further study how asteroids and planets coalesce from the rings of dust particles that surround young stars. Delving into that mystery could help refine current knowledge of the behavior of similar dusty plasmas commonly used in industry. Matthews says her award was a watershed event in her development as a scientist.

“The CAREER award is aptly named,” Matthews said. “It truly did allow me to jump start my career, providing funds for a post-doctoral research assistant, graduate students, travel to conferences, publication costs, as well as key research equipment. Having funding in place for five years was a luxury which allowed me to focus on my research.”

In 2014, Baylor biochemist Bryan F. Shaw, Ph.D., associate professor of chemistry and biochemistry in the College of Arts & Sciences, also was awarded a five-year, $405,000 CAREER grant to support his study of metalloproteins — proteins that contain metal ions. Previous research suggests that some metalloproteins may play a role in the development of some devastating neurological disorders. Shaw and the research group he leads are working to precisely measure and then modify metalloproteins’ net electrical charge. Shaw believes that altering the charge may reduce the protein’s toxicity to brain tissue — as occurs in Amyotrophic Lateral Sclerosis or Lou Gehrig’s Disease — and might one day prevent or even reverse the formation of toxic protein plaques and tangles associated with Alzheimer’s Disease.

That same year saw Seung Kim, Ph.D., associate professor of electrical and computer engineering in the School of Engineering and Computer Science, win a CAREER grant totaling $400,000 for development of a low-cost biosensor capable of detecting substances associated with specific diseases and disorders in specimens of a patient’s blood. In detecting these so-called biomarkers, the biosensor can reveal the presence of cardiovascular disease, kidney disease, HIV, as well as a number of cancers, and do so at a stage when the conditions are most successfully treated. Kim sees his biosensor as having the potential to reduce the need for expensive laboratory tests and eliminate the fretful wait for results. It also will be a “point-of-care” device that can be used in a physician’s office or even at the patient’s bedside. (Listen to Dr. Seung Kim discuss his research on the Baylor Connections podcast.)

Earlier this year, two more Baylor investigators were notified of their selection to receive 2018 CAREER grants.

Howard Lee, Ph.D., assistant professor of physics in the College of Arts & Sciences, has received a five-year, $500,000 CAREER Award for development of ultra-thin, nanoscale optical films with electrically tunable properties. The films, called metasurfaces, are only a few hundred atoms thick and have the potential to dramatically reduce the size and weight of a vast range of optical and electro-optical devices, while also improving their performance.

Caleb D. Martin, Ph.D., assistant professor of chemistry and biochemistry in the College of Arts & Sciences, also received confirmation this year of a five-year, $650,000 CAREER grant to further his research into synthesizing analogues of benzene containing boron. This class of materials has the potential to improve the durability and performance of organic photovoltaic solar cells and organic light emitting diodes used in such devices as smart phones, TVs and tablets. Martin further sees his work as possibly helping bring electrical power to millions of people living in remote or underdeveloped regions of the world.

Baylor’s CAREER grant recipients and regards receiving such award are accomplishments that can dramatically advance the careers of researchers who are just starting out, said Truell Hyde, Ph.D., vice provost for research.

“CAREER grants are among the federal grants most sought-after by young researchers. Besides the funding itself, winning a CAREER grant tells recipients that these agencies have high regard for their abilities as researchers and consider their work to be important. That’s a huge boost to any researcher’s self-confidence and reputation,” Hyde said, adding, “and it reflects well on their university as well.”

The Office of the Vice Provost for Research (OVPR) assists faculty members from all academic units in identifying, obtaining and managing the funding needed to support their research and scholarship. Internal 'seed' funding, matching grant proposal funding, searchable online funding databases, grant writing seminars, proposal support and travel awards to national funding agencies are only a portion of what is provided by the various units comprising the OVPR. Additionally, the Vice Provost for Research oversees the ethical conduct of research and assists researchers in maintaining compliance with applicable policies, laws, and regulations as well as providing support in establishing interdisciplinary / international collaborations and industry partnerships.

The OVPR acts as Baylor's representative in pursuing partnerships and collaborative agreements with entities outside the university. The office negotiates sponsored research agreements with industry on behalf of faculty and pursues research, technology transfer, and the commercialization of technology. The OVPR welcomes the opportunity to discuss collaborative research and scholarship pursuits that can advance the academic mission of Baylor University to achieve R1/T1 status.