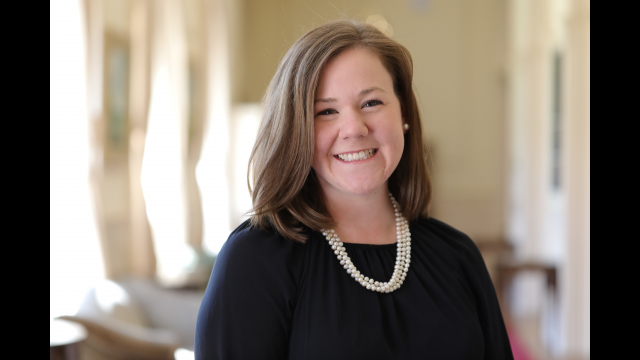 Holly Oxhandler, Ph.D., associate dean for research and faculty development in the Garland School of Social Work, served as lead author on the study, which was published in the journal Spirituality in Clinical Practice.

Researchers examined data from 55 young adults (ages 18-25) with serious mental illness who had used crisis emergency services. Of the 55 young adults interviewed, 34 “mentioned religion or spirituality in the context of talking about their mental health symptoms and service use with little-to-no prompting,” researchers wrote.

The sample for the study was racially diverse and gender-balanced. Not all of those interviewed considered themselves religious, as 41 percent answered “other,” “I don’t know” or “none” when asked their religious preference. However, researchers found that religion and spirituality emerged as a unique way in which this sample was able to make sense of their difficult life situations and mental health struggles.

“Not only did these young adults struggle with serious mental illness, but they had also experienced extreme adversity – including abuse, poverty, homelessness, addiction, near-death experiences, loss and an overwhelming lack of access to medical and mental health services,” researchers wrote. “Yet, many attempted to explain, make sense of or organize their circumstances through their religious/spiritual perspective and talked about God as a source of comfort and support.”

The young adults expressed both positive and negative views of God, prayer and support from religious and spiritual communities. Regardless of their views, the important thing to note, Oxhandler explained, is that they’re talking about these topics – something social workers and counselors traditionally are not often equipped or trained to assess or discuss.

“It’s the elephant in the room,” Oxhandler said of discussions of religion and spirituality. “If we continue to ignore it, we’re ignoring a huge component of peoples’ lives that may be tied to the clinical issue.”

Oxhandler, who has researched this area extensively, said such discussions can help drive subsequent treatment options.

“As mental health care providers discern what mental health services to provide or coping strategies to recommend, it’s especially important they understand the role of religion/spirituality in the lives of the vulnerable young adults they serve,” she said.

Negative religious coping or experiences included having a negative experience with a religious organization not being supportive or receiving hurtful messages from the religious community.

“Those who discussed their relationship with God or a higher power discussed God providing a sense of comfort or protection, accepting them for who they are or positively intervening in their lives,” Oxhandler said. “Among those who unpacked the role of their support systems and faith, they often described family and friends referencing religion or God for support, and some even offered recommendations for others struggling with mental illness that involve religion and spirituality.”

Some of those interviewed shared that they found the mention of God or religion by family and friends less than helpful.

For example, a 22-year-old white female with no religious identification mentioned in her interview that a family member “tries to tell me that going to church will be better for me because it will help me find peace, and it really does quite the opposite.”

Interestingly, researchers noted that nearly all participants who reported negative experiences with religion and spirituality also reported utilizing positive religious and spiritual coping or having a positive relationship with God.

Oxhandler said such complexity highlights the importance of including religion and spirituality during the initial assessment with a client.

“It’s critical that mental health care providers be well equipped and trained to assess for the complex role of religion and spirituality in the lives of young adults with serious mental illness, recognizing that it could appear to be a tremendous source of support and resilience and/or a source of pain and discomfort, if even a part of their lives at all,” she said.

Baylor University’s Diana R. Garland School of Social Work is home to one of the leading graduate social work programs in the nation with a research agenda focused on the integration of faith and practice. Upholding its mission of preparing social workers in a Christian context for worldwide service and leadership, the School offers a baccalaureate degree (B.S.W.), a Master of Social Work (M.S.W.) degree and three joint-degree options, M.S.W./M.B.A., M.S.W./M.Div. and M.S.W./M.T.S., through a partnership with Baylor’s Hankamer School of Business and George W. Truett Theological Seminary, and a Ph.D. program. Visit www.baylor.edu/social_work to learn more.