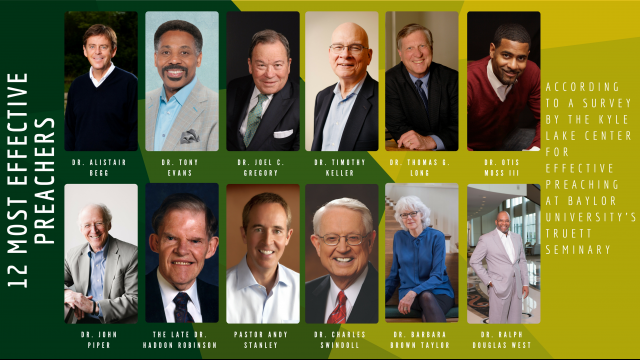 WACO (May 1, 2018) — The 12 most effective preachers in the English-speaking world have been identified in a survey by the Kyle Lake Center for Effective Preaching at Baylor University's George W. Truett Theological Seminary. Scholars of homiletics made the selections from nearly 800 nominees.

The preachers were chosen based on how well their preaching represented seven criteria determined by members of the Evangelical Homiletics Society (EHS) and the Academy of Homiletics (AoH), composed of homiletics professors.

(WATCH: Truett Seminary announces 12 Most Effective Preachers from survey, May 1, 2018)

It has been more than two decades since the 1996 Baylor University survey to identify the 12 most effective preachers in the English-speaking world. In 2016, the Kyle Lake Center for Effective Preaching sent the 1996 criteria to hundreds of professors of homiletics for their input on criteria for the new survey. After a survey establishing the criteria, members of both homiletics societies were asked to nominate as many as five preachers who demonstrate the criteria in their preaching.

Those casting votes in the survey numbered 179 — more than 30 percent of the approximately 500 members of the EHS and AoH. Results were chosen from 39 individuals who received the largest number of nominations.

Four of the preachers selected in the 1996 survey also were chosen in the new one. The most effective preachers, listed in alphabetical order, are:

Dr. Otis Moss III, pastor of Trinity United Church of Christ in Chicago, Illinois. He is a preacher, activist, author, and filmmaker. Moss is an ordained minister in the Progressive National Baptist Convention and the United Church of Christ. He is on the board of The Christian Century Magazine and chaplain of the Children's Defense Fund's Samuel DeWitt Proctor Child Advocacy Conference. Moss has written numerous poems, articles and books. His work has also been featured in the Huffington Post, Urban Cusp and The Root.

"Of great interest is the diversity represented in the new survey, especially with regards to ethnicity and ministry," said Truett Seminary's W. Hulitt Gloer, Ph.D., professor of Christian Scriptures, The David E. Garland Chair of Preaching and director of the Kyle Lake Center for Effective Preaching. He noted that three of the 12 are African-American. Pastors were chosen predominantly, with four academics.

2. Relevance. A sermon should bridge the gap between a text's meaning in its historical context and its meaning for the contemporary hearer in application to everyday life.

3. Person of the Preacher. The preacher's life and ministry should demonstrate authenticity, integrity and commitment to the Christian faith so that the sermon is never questioned or compromised by the preacher's character.

4. Theological/Orthodox. The effective preacher's sermons should proclaim the truths of the Christian faith in keeping with Christian theological and ethical tradition.

5. Sermon Form. Sermons should employ a form/structure/shape allowing the text's meaning to be exposed in an understandable, engaging way from beginning to end.

6. Effective Communication. The sermons should communicate the text's central truths with accessible language and effective images and illustrations.

7. Delivery. The sermons should skillfully employ a style authentic to the preacher and appropriate for the hearers, never superseding the content but enabling hearers to better understand it.

"We noticed rather quickly that there were changes in the criteria," Gloer said. "Yet, while some changed, some remained the same. One of the chief reasons for the survey is to ask 'why' and to open the door for research to answer that very question. Two reasons that certainly play a part relate to changes in the cultural, social, economic, and religious landscape of the preacher and developing understandings of the nature of preaching."

The survey aims to examine the factors which have precipitated the changes both in preaching and the teaching of preaching "so that we may continually be becoming more effective," Gloer said.

"In a world where talk is cheap and there seems to be no end to it, the preacher has to recover the priority and power of the word," he said. "The Hebrew understanding of words is that they both say something and do something. They have the power to bless and to curse, to wound and to heal, to build and to destroy. In fact, the worldview you function with is predicated on the words you know. Words are the tools of the preacher and that gives them incredible power."

Jared E. Alcántara, Ph.D., an ordained Baptist minister and assistant professor of homiletics at Trinity Evangelical Divinity School in Deerfield, Illinois, noted that "Today's preachers live in a rapidly changing world and, at least statistically, they already preach in an intercultural church with an intercultural future. To meet the demands before us, we will need the same biblical, exegetical and theological proficiency that we have always needed in the past, but we will also need more improvisational, cultural and intercultural proficiency than we have right now. This historical moment forces us to learn how to preach timeless truths in timely ways before diverse communities."

Apart from the inherent interest in such a poll, "this survey helps to identify, if not further solidify, some of the most skilled homileticians in the English-speaking world," said Todd Still, Ph.D., Professor of Christian Scriptures, holder of The William M. Hinson Chair of Christian Scriptures and holder of The Charles J. and Eleanor McLerran Delancey Chair of the Dean of Truett. "Additionally, it signals Truett's ongoing commitment to studying and promoting the best in preaching. To the extent that the survey is helpful in highlighting and extending inspired and inspiring preaching, we are grateful and gratified."