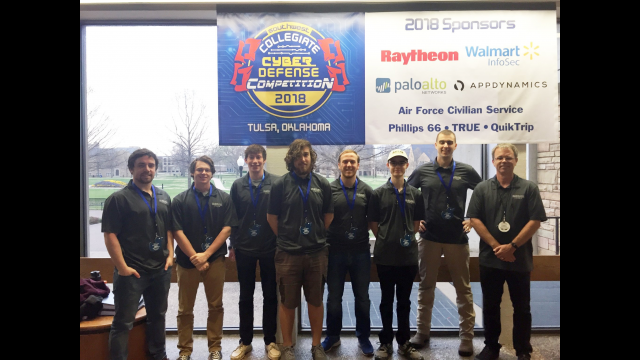 “The team works incredibly hard to prepare for CCDC competition,” said Jeff Donahoo, Ph.D., professor of computer science at Baylor and coach of the BU Cyber Security team. “We practice together for five hours every week, and each member then spends additional time on their own to develop their specific capabilities. To train, we have built a system where we can attack hackers without damaging campus systems.”

During the regional competition, the Baylor team came in first against seven other teams from five states in the region.

“Cybersecurity is about safeguarding our private information and protecting the critical infrastructures we all depend on for our daily lives,” Donahoo said. “Here, it is not sufficient to just be good at cybersecurity; one must be better than those who would do harm. The better individual – hacker or security – is determined in competition, whether simulated or real. Contests like CCDC allow future practitioners to compete where failure, while unpleasant, is constructive.”

National CCDC competitions test team’s cybersecurity skills by having them defend a commercial network against attacks by a “red team” of professional hackers. Teams are scored on their ability to minimize system infiltration, keep critical services in operation and prevent exfiltration of sensitive data.

In 2005, the Center for Infrastructure Assurance and Security at the University of Texas at San Antonio agreed to host the first CCDC for the Southwestern region. This competition was held to help facilitate the development of a regular, national-level cyber security exercise.