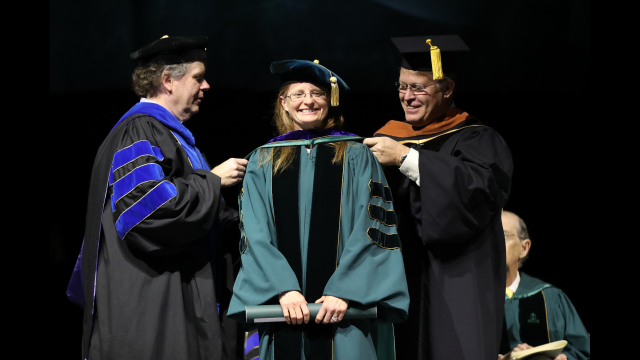 The latest rankings are published online at www.usnews.com and in the U.S. News’ “Best Graduate Schools 2019” guidebook.

The rankings in business, education, engineering, law, medicine and nursing, including specialties in each area, are based on two types of data: expert opinions about program excellence and statistical indicators that measure the quality of a school’s faculty, research and students. The data for these rankings come from statistical surveys of more than 2,012 programs and from reputation surveys sent to more than 20,500 academics and professionals, conducted in fall 2017 and early 2018.

Beyond the six major disciplines ranked annually, U.S. News also periodically ranks programs in science, social sciences and humanities, health and many other areas based solely on academic experts’ ratings.

Baylor Law climbed into the Top 50 in the magazine’s “Best Law Schools” listing for 2019. In the law specialties rankings, Baylor’s trial advocacy program remains one of the top five programs in the nation.

The U.S. News rankings of 194 law schools fully accredited by the American Bar Association are based on a weighted average of the 12 measures of quality described below. Data were collected in fall 2017 and early 2018. Specialty rankings are based solely on nominations by legal educators at peer institutions.

In addition to moving into the Top 50 “Best Law Schools,” Baylor Law is first among Texas law schools in the state’s bar exam passage rate.

Baylor’s Hankamer School of Business moved up to No. 59 among the top-rated master’s programs in business. The graduate program in entrepreneurship debuted at No. 24.

In addition, the MBA in health care administration, a specialization in Baylor’s MBA program in the Hankamer School of Business, was last ranked in 2015 by U.S. News at No. 17 in the nation.

To determine the rankings, U.S. News surveyed all 480 MBA programs in business accredited by the Association to Advance Collegiate Schools of Business International, with 387 responding in fall 2017 and early 2018. The rankings were calculated on a weighted average of seven measures of quality, including peer and recruiter assessments, placement success and student selectivity. Specialty rankings are based solely on ratings by business school deans and directors of accredited MBA programs from the list of schools surveyed.

The master of science degree in nursing (MSN) program at Baylor’s Louise Herrington School of Nursing (LHSON) in Dallas was ranked No. 72 in the 2019 U.S. News graduate rankings, while the doctor of nursing practice (DNP) program was ranked No. 54.

In addition, LHSON’s nurse-midwifery program was ranked No. 10 nationally under the health disciplines category, which was last ranked in 2016.

Among online programs, Baylor’s online master’s degree program in nursing leadership and innovation was ranked No. 39 in the U.S. News online program rankings. The rankings were based on factors such as faculty credentials and training, student engagement, admissions selectivity, peer reputation and student services and technology.

Baylor’s School of Education, which is among the nation’s top 20 education schools located at private universities, moved up to No. 84 in the 2019 U.S. News graduate program rankings.

For the U.S. News rankings of graduate education programs, 385 schools granting doctoral degrees were surveyed in fall 2017 and early 2018. The rankings were based on a weighted average of 10 measures of quality, including peer and educational professional assessments, student selectivity, faculty resources and research activity.

In the U.S. News graduate rankings of engineering schools that grant doctoral degrees, Baylor’s School of Engineering and Computer Science and its graduate engineering program was ranked No. 127.

To determine the rankings, U.S. News surveyed 214 engineering schools that grant doctoral degrees in fall 2017 and early 2018. Rankings for the 199 schools that provided the data were calculated based on a weighted average of 10 measures of quality, including peer and recruiter assessments, student selectivity, faculty resources and research activity. Engineering specialty rankings are based solely on peer assessments by department heads in each specialty area. The peer assessment surveys for the specialty area rankings were conducted in fall 2017.

U.S. News did not newly rank graduate health disciplines this year, with the exception of Social Work graduate programs in the Diana R. Garland School of Social Work, which were ranked at No. 68 this year.

U.S. Army-Baylor health programs are operated at the Academy of Health Sciences at Fort Sam Houston in San Antonio.

Rankings of doctoral programs in the sciences are based solely on the results of surveys sent to academics in biological sciences, chemistry, computer science, earth sciences, mathematics, physics and statistics.

U.S. News newly ranked the Social Sciences and the Humanities, which were last surveyed in 2013. Ranked Baylor graduate programs in the College of Arts and Sciences include: