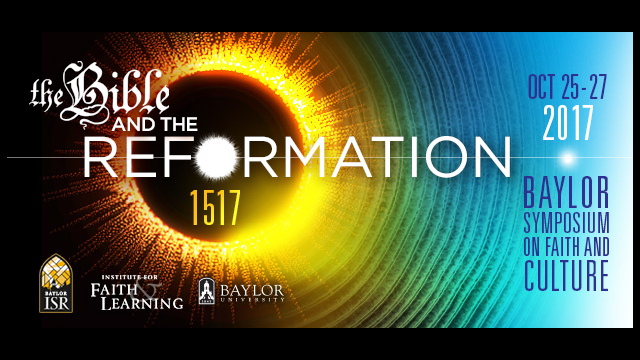 WACO, Texas (Oct. 19, 2017) — The annual Baylor Symposium on Faith and Culture this year will commemorate the 500th anniversary of the beginning of the European Reformation, one of the most significant times in the history of Christianity.

Since Christianity’s earliest days, believers have differed widely about the proper use, interpretation and translation of the Bible, and the symposium will focus on how those issues and questions might guide new generations of Christians, said Darin H. Davis, Ph.D., Vice President for University Mission and Director of IFL.

“It is Baylor’s great privilege to host one of the most significant scholarly gatherings on the Reformation held anywhere during this momentous year,” Davis said. “Renowned scholars from across the disciplines will join students, pastors, and laypersons from across North America, Europe and Africa, as we explore the enduring significance of the Reformation.”

Among the speakers will be:

• Timothy George is founding dean of Beeson Divinity School at Stamford University in Birmingham, Alabama. He served as chair of the Doctrine and Christian United Commission of the Baptist World Alliance. He is senior theological advisor for Christianity Today and on the editorial board of First Things. He has written more than 20 books, among them Reading Scripture with the Reformers and Theology of the Reformers.

• Mark Noll, Ph.D., recently retired as Francis A. McAnaney Professor of History at the University of Notre Dame and now serves as research professor of history at Regent College. His research and teaching deal with the history of Christianity in the United States, Canada and the Modern World. In 2005, TIME magazine named him one of the 25 most influential evangelicals in America. He is a Fellow of the American Academy of Arts and Sciences and served as advisory editor for Books & Culture. His most well-known book, The Scandal of the Evangelical Mind, was named “Book of the Year” by Christianity Today.

• Ven. Godwin Yusufu Makabi is a priest of the Anglican Communion (Church of Nigeria), working with the Anglican Diocese of Jos, Nigeria. He serves at the Christian Institute in Jos, attending to its pastoral needs — particularly in its northeast area, where Christianity faces the greatest persecution in the country. He is a lecturer for church history courses and serves as academic dean of the seminary and its archdeacon.

The symposium will be held in Bill Daniel Student Center, 1311 S. Fifth St.

For a full list of speakers and a symposium schedule, as well as to register, visit The Bible and the Reformation. For more information, call 254-710-4805.

All sessions are free and open to Baylor faculty, staff and students. Members of the Waco community also are invited to attend all sessions free of charge. Meals are available for a nominal cost if registering by the deadline. Deadline to register is 5 p.m. Friday, Oct. 20, 2017.

ABOUT THE INSTITUTE FOR FAITH AND LEARNING

The Institute for Faith and Learning was founded in 1997 to assist Baylor in achieving its mission of integrating academic excellence and Christian commitment, and its goal of becoming a university of the first rank committed to its Baptist and Christian heritage. Since its founding, the Institute has developed several major programs in support of this mission, cultivating high-quality research, sponsoring conferences, mentoring students, and encouraging teaching faithful to the Christian intellectual tradition.