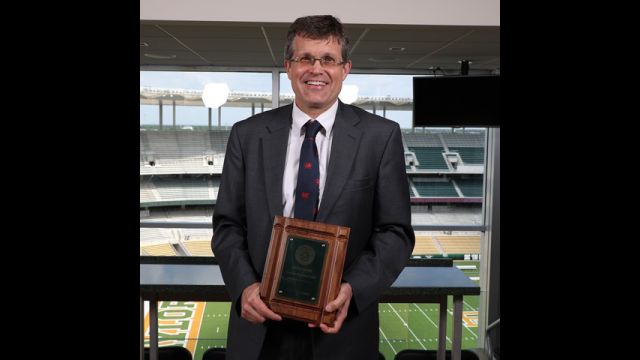 WACO, Texas (May 5, 2017) – Alden Smith, Ph.D., professor and chair of classics in the College of Arts & Sciences and associate dean of the Honors College, was named 2017 Cornelia Marschall Smith Professor of the Year during the Academic Honors Convocation on Friday, April 21.

With the award, Smith received a commemorative plaque and $20,000.

“It is a testimony to my students, for they are the ones who bring the best out of me and my colleagues. The award really is theirs,” Smith said. “I would like to mention one student, in particular, because the practical significance of this award will be to honor her memory. Her name is Amy Cariello. She passed away during my first year of teaching at Rutgers University in 1988. I would like to dedicate the proceeds of the award to a scholarship that already exists in her name, the Amy Cariello Scholarship for students participating in the Baylor in Italy program.”

As the winner of this award, Smith will present a lecture on the topic of his choosing during the next academic year.

“This award is presented each year to a Baylor faculty member who makes a superlative contribution to the learning environment at Baylor, including teaching which is judged to be of the highest order of intellectual acumen and pedagogical effectiveness, research which is recognized as outstanding by the national and/or international as well as local community of scholars, and service which is regarded as exemplary in building the character of intellectual community at Baylor,” said James Bennighof, vice provost for academic affairs and policy at Baylor. “As the selection committee and I read the nomination materials for this year’s award recipient, it was quite clear that he has excelled superbly in each of these three areas.”

In testimonials in support of Smith’s nomination, one student said, “In all honesty, it is difficult to pick a place from which to begin when I think about the kind of commitment that Dr. Smith has to his role as a mentor and teacher at Baylor University.”

As professor of classics, Smith teaches classes in Latin and Greek poetry and prose. He has also taught in the Baylor Interdisciplinary Core (BIC), the Great Texts program, the University Scholars program and the Honors program.

“To a greater degree than any other teacher I have known, Dr. Smith fervently wants all his students to succeed, and is willing to put in extra effort from his end to help them get there,” another student said. “One may say that in a vague and lukewarm sense, all teachers want their students to succeed. Dr. Smith is different. No one wants this like he does, and I’ve never seen anyone put in the effort, attention and exertion that he does to guarantee that anyone who wants to make it can make it.”

In addition to his teaching, Smith has authored, co-authored or edited seven books, with an eighth in progress. He is also the author of numerous scholarly articles and reviews. Additionally, Smith has presented dozens of lectures in the United States and abroad.

“To me personally, the real significance of the award lies in less well-known names, some very special educators who influenced my life and teaching style,” Smith said. “Among them is my own mother, Elaine Jakes Smith, who was a tremendous schoolteacher; my high school humanities teacher Zineida Sprowles; and, at Dickinson College, my classics professor, Philip Lockhart. These folks all taught me the profound value of a rich liberal education, an education that truly lasts a lifetime and changes one’s life for the better.”

The award is named for Cornelia Marschall Smith, Ph.D., a 1918 Baylor biology graduate who earned a master’s degree from the University of Chicago in 1925 and her doctorate from Johns Hopkins University in 1928. She was a professor of biology at Baylor from 1940 to 1967, chair of the biology department from 1943 to 1967 and director of Strecker Museum from 1943 to 1967. She retired in 1967 but maintained an office in Armstrong Browning Library to assist charitable causes. In 1980, Baylor honored Smith with an endowed chair known as the Cornelia Marschall Smith Professorship in Biology. She was celebrated among her colleagues, students and alumni for fine teaching, generous mentoring and her many interdisciplinary interests. She was a lively and continuing contributor to the Baylor intellectual community until her death on Aug. 27, 1997, at age 101.