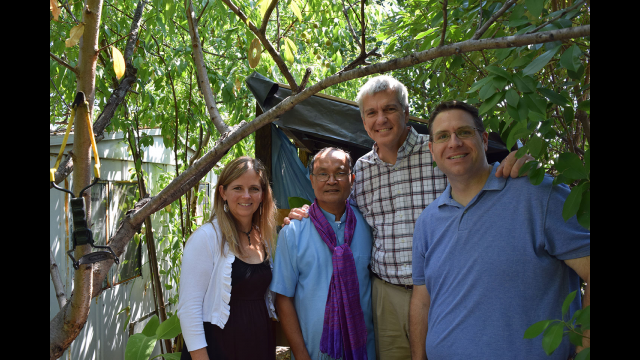 WACO, Texas (May 1, 2017) — As a little boy, Albert Cheng thrived in the lush jungle of Cambodia, playing and hunting rabbits and birds with slingshots and a bow and arrow. During peaceful times with his family, they walked together, holding hands.

The lessons he learned in the jungle and his love for his family served him well years later. As a college student away from home in the 1970s, he was among the hordes forced by the Khmer Rouge to evacuate from Phnom Penh. But he survived imprisonment and interrogation, escaping with some others into the jungle he knew so well and staying alive by catching and eating monkeys and cobras.

“To be able to be right in the jungle again — it’s like, there’s my home . . . You recall Tarzan? Can’t live without the jungle, and here I was like my jungle is my freedom,” Cheng said in a video interview.

The video and a transcript, detailing how he eventually fled to the United States and began a new life, are among firsthand accounts included in a project called “Survivors of Genocide” by Baylor University’s Institute for Oral History (IOH). Researchers with the institute have created an online exhibit, conducting extensive interviews in the homes of 14 people who faced atrocities in Cambodia, Rwanda, Bosnia, Darfur and Burundi but managed to escape and immigrate to the United States.

The survivors’ occupations ranged from rice farmer to electrical engineer to journalist, but their captors did not differentiate when it came to starving them, beating them or subjecting them to forced labor. Some, like Cheng, fled to jungles or mountains as children; others were prospering at careers before genocide shattered the world around them.

Today, they are scattered throughout Texas.

“This is amazing material of overcoming death, facing loss and fleeing to the United States,” said Stephen Sloan, Ph.D., director of the Institute for Oral History and associate professor of history in Baylor’s College of Arts & Sciences. “The best way to understand the human experience of these horrific events is to encounter the stories of those the events touched most personally, oral history gives us an effective approach to do this.”

Among those who shared their stories with IOH are:

Cheng has experienced flashbacks to the horrors he endured, and he grieves over a sister who was executed. But he counts himself fortunate to have escaped the atrocities and been reunited with a brother and another sister. He also credits his faith, including a sense that he was being guided and comforted through danger.

“I don’t understand yet, but beyond our own life here, there is another unseen life all around. When my body was exhausted, I remember the voice spoke clearly to me, “Get up and leave now.” I turned around, like ‘Who is it?’ . . . Even in the midst of hell and evil, there is some high being somewhere.”

That project, with videos synched to printed transcripts, ranges from the story of a chaplain who conducted a worship service for newly liberated Jewish survivors at Buchenwald to the account of a combat engineer who helped bulldoze mass graves for victims at Mauthausen to the engineer who witnessed the liberation of slave laborers in a secret German bomb factory.

Each of these projects was made possible by grants awarded by the Texas Holocaust and Genocide Commission.

ABOUT THE INSTITUTE FOR ORAL HISTORY

Through dynamic, recorded interviews, the Institute for Oral History preserves the stories of individuals who helped create the fabric of history and whose lives, in turn, were shaped by the people, places, events and ideas of their day. The Institute has recorded and preserved oral histories since 1970, earning along the way a strong reputation for multidisciplinary outreach to both academic scholars and community historians by providing professional leadership, educational tools, and research opportunities.