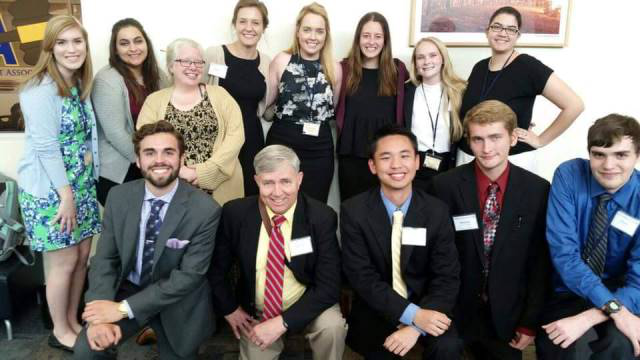 “I’ve really enjoyed working with the MAL students and head faculty advisor, Mark Long, this semester, said Lynn Whitcomb, Ph.D., lecturer in Arabic. “It was gratifying to see our two delegations, representing the member states of Bahrain and Oman, and a number of individuals new to this type of competition perform so well at the conference.”

“This model diplomatic exercise is a great way for interested students to learn more about the region and cultivate important ‘soft skills,’ which will strengthen their resumes and serve them well in many facets of their lives beyond Baylor,” Whitcomb said.

The competition featured a strong field of 17 colleges and universities representing 22 countries.

“It was remarkable to see just how well prepared and well educated the fellow delegates were,” said Lama Zakzok, senior anthropology major, of Austin, Texas. “I was particularly proud of my delegation. We went with a team this year that was mostly comprised of beginners, and they did fantastic. Baylor is always expected to do great at these conferences, and I believe we showcased just how intelligent and capable our Baylor Bears are.”

“In a very short period of time, our Baylor delegation had to master an impressive range of complex issues about the contemporary Middle East,” said Mark Long, Ph.D., associate professor in the Honors College and MAL head faculty advisor. “They grappled with topics as diverse as the lifting of sanctions against Iran, to the weaponization of water access, to cyberwarfare. Moreover, they had also to both hone debate skills and learn the intricacies of parliamentary procedure. They were more than successful, and the team emerged as one of the winningest that Baylor has fielded over the last 15 years.”