Biblical Mosaics Discovered in Ancient Israeli Synagogue Will Be Topic of Lecture by Excavation Director Jan. 19 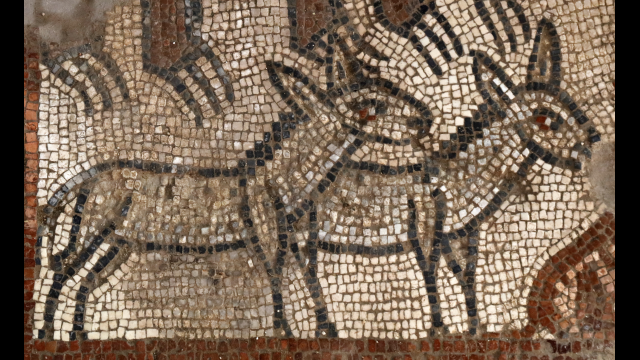 WACO, Texas (Jan. 12, 2017) — New discoveries of mosaics uncovered in an ancient synagogue in Israel’s Galilee region will be the topic of an upcoming slide-illustrated lecture by Jodi Magness, Ph.D., director of the excavations.

Magness’ presentation, which is free and open to the public, will be given at 5:30 p.m. Thursday, Jan. 19, in Baylor University’s McClinton Auditorium, Room 240, of the Paul L. Foster Campus for Business and Innovation, 1621 S. Third St.

Magness is a professor in the University of North Carolina at Chapel Hill’s College of Arts and Sciences and holds a senior endowed chair as Kenan Distinguished Professor for Teaching Excellence in Early Judaism in the university’s department of religious studies.

Baylor faculty and students are among members of a consortium of universities excavating the village of Huqoq, Israel, where remains of the fifth-century synagogue from the time of the Roman Empire are paved with mosaics depicting biblical accounts of the hero Samson, Noah’s ark and the parting of the Red Sea.

The mosaics, discovered on the nave floor, illustrate an ark and pairs of animals including elephants, leopards, donkeys, snakes, bears, lions, ostriches, camels, sheep and goats. They also show Pharaoh’s soldiers being swallowed by large fish, surrounded by overturned chariots with horses and chariot drivers.

The first non-Biblical mosaic ever found in an ancient synagogue also was discovered at Huqoq and portrays the legendary meeting between Alexander the Great and a Jewish high priest.

Nathan Elkins, Ph.D., assistant professor of art history in Baylor’s College of Arts & Sciences and specialist in ancient coins, is part of the team. Several Baylor students have accompanied him to the excavation each year since 2012.

“It is a great pleasure to be a staff member at Huqoq, a site that garners worldwide attention on account of the significance of the monumental synagogue and its unprecedented mosaic finds,” Elkins said.

The mosaics uncovered by the excavations have been removed from the site for conservation, and the excavated areas have been backfilled. Financial support for the 2016 excavations was provided by the National Geographic Society and the Memorial Foundation for Jewish Culture.

Next summer, Baylor’s participation will become more formalized with a study-abroad program called Baylor in the Galilee. An information session for interested students will be held at 2 p.m. Friday, Jan. 20, in Hooper-Schaefer Fine Arts Center 158, 60 Baylor Ave. on campus.