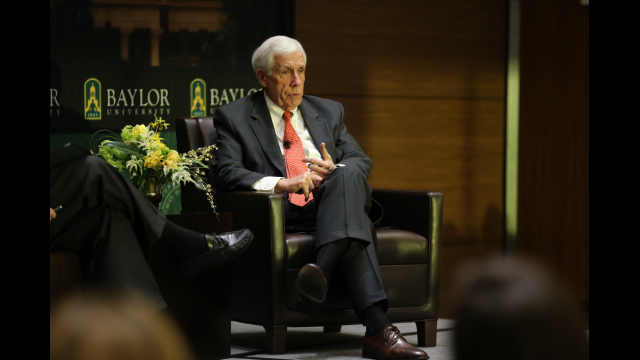 On Dec. 13, the House of Representatives voted unanimously to pass an amendment to the landmark international religious freedom law. The legislation, which was approved by the Senate on Dec. 10, was sent Dec. 15 to President Obama to be signed into law.

According to the text, the act “will improve the ability of the United States to advance religious freedom globally through enhanced diplomacy, training, counterterrorism, and foreign assistance efforts, and through stronger and more flexible political responses to religious freedom violations and violent extremism worldwide.”

Leaders, such as the act’s namesake, former Virginia Rep. Frank Wolf, holder of The Jerry and Susie Wilson Chair in Religious Freedom at Baylor University, have played a key role for many years in championing international religious freedom. More recently, Rep. Christopher H. Smith, R-New Jersey, has helped to spearhead the new legislation.

According to the Pew Research Center, 77 percent of the world’s population lives in nations where religion is severely restricted. The worst restrictions occur in regions outside the West, particularly in the Middle East, Africa, Russia, and South and East Asia.

“The crisis affects members of virtually every faith. In fact, more people are persecuted for their faith now than at any other time in history,” said Byron R. Johnson, Ph.D., Distinguished Professor of the Social Sciences and director of the Institute for Studies of Religion at Baylor University. “Currently, numerous individuals and organizations have acknowledged the need to create a movement in the United States for the protection of international and domestic religious freedom. These groups support achieving broad acceptance of religious liberty as a fundamental human right.”

According to Tom Farr, director of the Religious Freedom Project, a joint effort of Georgetown University and Baylor University, “This legislation will be instrumental in ensuring religious freedom becomes a priority for governments, civil society organizations, religious communities, businesses and the general public in the United States and around the world.”

David E. Garland, interim president of Baylor University, said, “Passage of this bill is an important first step, and it is time for faith-based leaders and institutions to be intentional in our efforts to remedy the plight of so many people around the world – Christians, Jews, Muslims, Hindus and people of all faiths – who are suffering persecution.”