School Breakfast Participation on the Rise in Texas 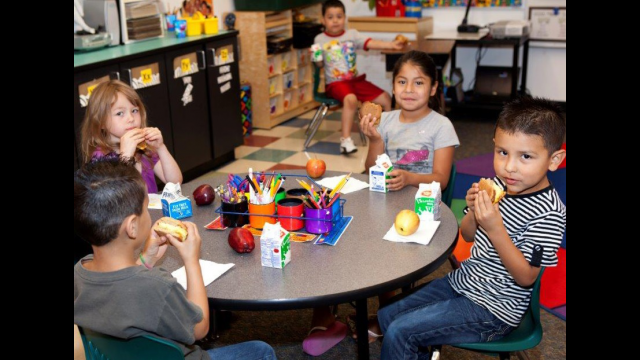 WACO, Texas (Sept. 14, 2016) – More Texas students than ever are starting their school days fueled for success with a school breakfast. And in a state where more than one in four children are food insecure, the public school system continues to grow as a primary infrastructure for reigning in childhood hunger, according to the third edition of the Texas School Breakfast Report Card, compiled by Baylor University’s Texas Hunger Initiative (THI).

THI’s Texas School Breakfast Report Card breaks down the average breakfast participation for school districts in every county in Texas. The report also highlights creative models for serving breakfast and proven success strategies, such as “The Breakfast Crew” in San Angelo and “The Hallway Buffet” in Irving.

Capturing participation data in school breakfast for nearly all of Texas, the report is a powerful example of how data can be used to fight hunger.

“We look at food insecurity data from a statewide perspective, which allows us to recognize trends and develop effective strategies that can be implemented across our diverse state,” said Kathy Krey, Ph.D., director of research for the Texas Hunger Initiative. “It is an invaluable tool for improving participation in school breakfast and reducing childhood food insecurity.”

Each section of the Report Card provides school administrators, educators, child nutrition professionals and the nonprofit community with a succinct, practical instrument to increase participation in school breakfast and, ultimately, take an important step toward reducing childhood food insecurity and create a healthy, hunger-free learning environment.

Key findings from the Texas School Breakfast Report Card for the 2014-2015 academic year:

The Texas Hunger Initiative at Baylor works with school districts and communities across the state to improve participation in school breakfast through innovative alternative service models, like Breakfast in the Classroom, Grab and Go, Breakfast after First Period, Breakfast on the Bus and vending machines.

“I’m excited that we are getting close to our participation goal and even more excited that Texas is no longer one of the five states with the highest rate of childhood hunger,” Krey said. “Improving access to our schools’ breakfast program is important, but only one step. As a state, and in our communities, we need to continue to address poverty and ensure that every child and family has access to healthy food, every day.”

Research on benefits of school breakfast

Recent studies published in Frontiers in Human Neuroscience, AMA Pediatrics, Food Studies and by the National Bureau of Economic Research, No Kid Hungry and Sodexo found that making breakfast part of the school day improves academic performance, creates healthy habits and helps Texas students focus on learning instead of an empty stomach.

ABOUT THE TEXAS HUNGER INITIATIVE

The Texas Hunger Initiative (THI) at Baylor University is a capacity-building and collaborative project, which develops and implements strategies to end hunger through policy, education, research, community organizing and community development. THI works to make the state food secure by ensuring that every individual has access to three healthy meals a day, seven days a week. THI convenes federal, state and local government stakeholders with non-profits, faith communities and business leaders to create an efficient system of accountability that increases food security in Texas. THI’s work to increase participation in school breakfast programs is supported by No Kid Hungry. Along with its office located within the Diana Garland School of Social Work at Baylor, THI has offices located in Austin, Dallas, El Paso, Houston, Lubbock, McAllen and San Angelo.