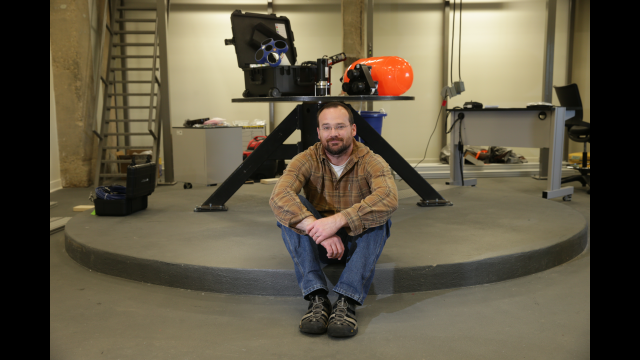 WACO, Texas (Sept. 6, 2016) – Joseph Kuehl, Ph.D., assistant professor of mechanical engineering in Baylor’s School of Engineering and Computer Science, is partnering with a team of scientists to try to understand what caused a “large-scale mortality event” in July at the Flower Garden Banks National Marine Sanctuary, a unique coral reef located in the Gulf of Mexico, 115 miles south of the Texas/Louisiana border.

Oceanographers and scientists from numerous organizations hope to identify what led to the death of “unprecedented numbers of dying corals, sponges, sea urchins, brittle stars, clams and other invertebrates on large but separate patches of the reef,” according to updates on the Sanctuary’s website. Telltales of the damage included “green, hazy water, huge patches of ugly white mats on corals and sponges, and dead animals littering the bottom at East Flower Garden Bank.” Some of the colonies that were wiped out were believed to be more than a thousand years old.

Kuehl, who has doctoral degrees in physical oceanography and mechanical engineering, is studying the transportation of oil pollutants along the Gulf of Mexico. Based on this research project and his expertise in fluid dynamics, he was asked to deploy some of his equipment to measure the currents, dissolved oxygen levels, salinity and temperature of the Flower Garden Banks. He and personnel from the Flower Garden Banks National Marine Sanctuary will collect data and monitor those results for the next year.

“The ocean is a very challenging environment, and to understand the ocean as a system, one must look at all aspects – biology, chemistry, geology, fluid dynamics,” he explained. “The instruments that we’re providing and monitoring will give us an idea of the seasonal patterns and help us have a better understanding of the Flower Garden Banks. Even if this never happens again, we’ll still learn and understand the larger consequences.”

To learn more about the Flower Garden Banks National Marine Sanctuary and to follow the research updates, visit the website.

With more than 10 percent of Baylor University’s freshman class pursuing major courses of study in the School of Engineering and Computer Science (ECS), the focus remains on preparing graduates for professional practice and responsible leadership with a Christian world view. ECS majors include bioinformatics, computer science, electrical and computer engineering, general engineering, and mechanical engineering. Among ECS graduate programs are Master of Science degrees in all disciplines, a Ph.D. in electrical and computer engineering, and several dual degree programs. The Teal Residential College for Engineering and Computer Science, in which students and faculty live, fosters the pursuit of wisdom, academic excellence, and meaningful relationships for the development of diverse, innovative leaders.