Baylor’s Black Gospel Music Restoration Project to be a Highlight in the Sept. 24 Opening of the Smithsonian’s National Museum of African American History in D.C. 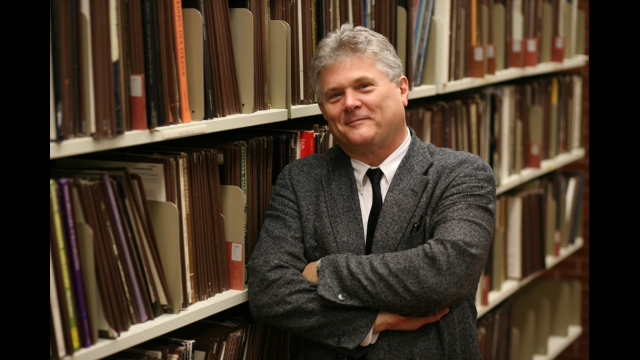 WACO, Texas (Sept. 6), 2016) — When the Smithsonian Institution’s National Museum of African American History and Culture (NMAAHC) opens Sept. 24 in Washington, D.C., an exhibit featuring African-American musical history will include materials from a Baylor University search-and-rescue mission to save recordings from the “Golden Age” of American black gospel music.

An interactive display featuring “The Old Ship of Zion,” one of the key recordings of Baylor’s Black Gospel Music Restoration Project (BGMRP), will be among the highlights of the permanent exhibit, called Musical Crossroads.

“Having this music that the team has worked so hard to preserve featured in the museum is beyond wonderful,” said BGMRP founder Robert F. Darden, professor of journalism, public relations and new media in Baylor’s College of Arts & Sciences.

“To be part of the Smithsonian on something this vital in American life, especially now, reinvigorates everyone who works with this music on a daily basis,” he said. “These recordings are priceless, irreplaceable and historic in a way that scholars are only now realizing.”

The opening coincides with the 10-year anniversary of the project, begun at Baylor to identify, acquire, preserve, digitize and catalog recordings from the black gospel music tradition. Many of those recordings, from the era of 1945 to 1975, were vanishing as albums made the transition to CDs. While albums by such legends as Mahalia Jackson were readily available, only a few by lesser-known greats were.

The project was launched shortly after The New York Times published an op-ed in February 2005 by Darden, who lamented the vanishing number of classic releases from the Golden Age. While contemporary gospel was thriving, “Each day, irreplaceable master tapes deteriorate, get lost or are simply tossed out,” wrote Darden, former gospel editor for Billboard magazine. “It would be more than a cultural disaster to forever lose this music. It would be a sin.”

Since its inception, the project has grown to include 1,968 items in its online collection, among them LPs, 78s, 45s and pieces of music in taped formats that have been loaned or donated from throughout the world, with more arriving daily, Darden said.

Through the work of the Baylor Libraries’ Digital Projects Group, recordings are available online in the Baylor Libraries Digital Collection, which also attracts researchers and others to Baylor in person. The collection includes streaming audio, photos, press packets, taped interviews, informal photographs, tour books and programs, newspaper and magazine clippings, and sheet music.

Baylor has provided unrestricted access to BGMRP materials for the new museum’s curatorial staff to select materials to include in the future for the Musical Crossroads exhibit.

“We had two goals in the beginning,” Darden said. “One goal has always been to save this fast-vanishing treasure. We’re doing that. The other goal has been to make this extraordinary music as widely available as possible. Working with the Smithsonian accomplishes that in a way that far exceeds our wildest dreams. I still can’t believe it is happening sometimes.”

Baylor’s partnership with the museum provides “a unique opportunity for the world to experience the black gospel music tradition,” said Pattie Orr, vice president for Information Technology and dean of University Libraries at Baylor.

“This rich music heritage could easily have been lost to history,” she said. “Instead, thanks to the diligent efforts of our digital project team’s preservationists and to NMAAHC’s decision to curate this collection, people everywhere will have access. NMAAHC visitors who explore the digital collections available from the Baylor Gospel Music Restoration Project will be truly enriched.”

In Baylor’s initial display at the museum, users can learn more about the roots of American black gospel music by tapping on an image of the label of “The Old Ship of Zion,” recorded in 1972 by The Mighty Wonders of Aquasco, Maryland. That will launch a 30-second clip of the music and provide users with a link to tap for further information on the group.

The long-range plan with the NMAAHC is to include not only interactive displays but also reproductions of numerous album covers, Darden said. They will be placed in bins like those found in old-school record stores, allowing users to thumb through the covers to see examples of the kind of art featured on album jackets from the Golden Age of American black gospel music.

“I understand that one of the goals was to recreate, at least in part, the look and feel of a 1950s African-American record shop,” Darden said. “So much of what is missing in modern digital music is the experience to touch and hold the LPs, to enjoy the cover artwork and read the detailed information on the inner sleeves. That tactile part of it is missing today.”

The NMAAHC was established in 2003, with President Barack Obama taking part in the February 2012 groundbreaking for its building, designed by British architect David Adjaye. Historian and author Lonnie G. Bunch III, the museum’s founding director, said the museum will tell the American story through the lens of African-American history and culture, but “this is America’s story and this museum is for all Americans.”

The museum will feature traveling exhibitions and public events ranging from panel discussions and seminars to oral history and collecting workshops.

Darden’s latest book, “Nothing But Love in God's Water, Volume II: Black Sacred Music from Sit-Ins to Resurrection City” (Penn State University Press), will be released the week of Sept. 19. He is the author of “People Get Ready! A New History of Black Gospel Music” and “Nothing But Love in God's Water: Black Sacred Music from the Civil War to the Civil Rights Movement, Volume I.”

Baylor University Libraries and the Pruit Symposium will host a reception Sept. 19 to celebrate the permanent inclusion of the BGMRP in the museum. “Shout: Black Gospel Music Moments” will include demonstrations of long-lost gospel music and presentations highlighting the importance of its preservation offered by Darden, Orr and black gospel music scholar and composer Dr. W. James Abbington, associate professor of church music and worship at Emory University’s Candler School of Theology.

The event will be at Van Scoyoc Associates, 101 Constitution Ave. N.W., Suite 600 West, Washington, D.C. The reception and music demonstrations will begin at 6 p.m., with the main program following at 6:45 p.m.

The event is free but registration is required.

*The support from Harold (BBA '51) and Dottie Riley of Austin continues to strengthen Baylor University's digitization efforts by equipping the Libraries with the Ray I. Riley Digitization Center, named in memory of Harold's father, and the Dottie S. Riley Conference Room. Their support has funded state-of-the-art equipment and facilities that allow the University to enhance preservation of such materials.

The Baylor University Libraries support excellence in teaching and learning, enhance research and discovery, and foster scholarship and success. Through its Central Libraries and special collections – Armstrong Browning Library, W.R. Poage Legislative Library and The Texas Collection – the Libraries serve as academic life centers that provide scholarly resources and technological innovation for the Baylor community and beyond.