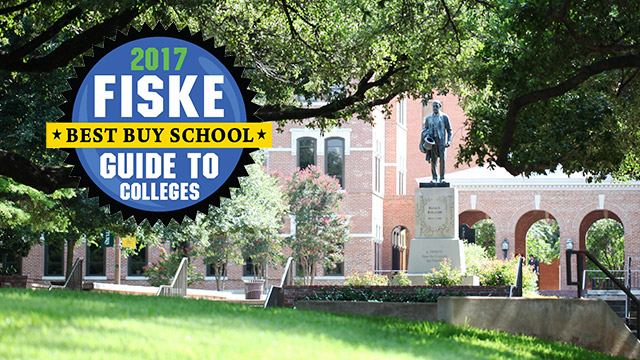 Baylor is one of only 47 public and private colleges and universities included on Fiske’s “Best Buy List,” along with three fellow Big 12 universities and three Texas institutions.

The authors of the 2017 edition of The Fiske Guide to Colleges selected Baylor as a "Best Buy" based on the quality of the university’s academic programs and campus experience in relation to the cost of attendance. From that data, the Fiske researchers determined Baylor offered one of the best values in higher education.

For 33 years, The Fiske Guide to Colleges has provided college-bound students and their parents an insider’s look at the academic climates and the social and extracurricular scenes at the “best and most interesting” schools in the United States, Canada and Great Britain. The guide’s author, Edward B. Fiske, served 17 years as education editor of The New York Times, during which time he realized that college-bound students and their families needed better information on which to base their educational choices.

Baylor University is a private Christian University and a nationally ranked research institution, characterized as having “high research activity” by the Carnegie Foundation for the Advancement of Teaching. The University provides a vibrant campus community for approximately 16,000 students by blending interdisciplinary research with an international reputation for educational excellence and a faculty commitment to teaching and scholarship. Chartered in 1845 by the Republic of Texas through the efforts of Baptist pioneers, Baylor is the oldest continually operating University in Texas. Located in Waco, Baylor welcomes students from all 50 states and more than 80 countries to study a broad range of degrees among its 12 nationally recognized academic divisions.