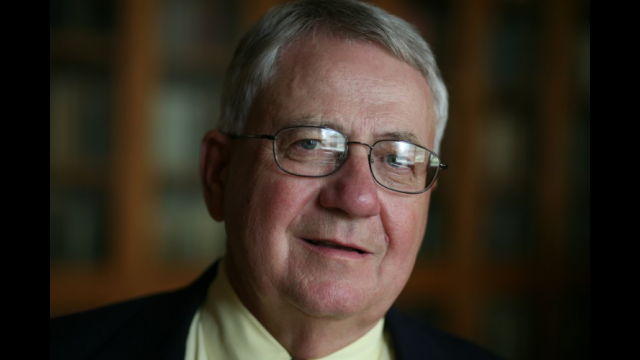 WACO, Texas (Feb. 25, 2016) - Baylor University is mourning the passing of James E. Barcus Jr., Ph.D., retired professor of English and former longtime department chair, who passed away Feb. 20 after a courageous battle with cancer. He was 77.

A gifted and talented teacher of English for more than 50 years, Dr. Barcus taught at Houghton College in New York, Trinity College in Illinois and Baylor University, retiring in January after 36 years of faithful service.

“Dr. James Barcus left an astounding legacy for generations of English literature scholars,” said Dr. Kevin J. Gardner, chair and professor of English in Baylor’s College of Arts and Sciences. “He indelibly touched the lives of innumerable students through his deep and abiding appreciation of poetry, and he made a lasting impact on Baylor in the many grateful faculty members whom he mentored over the years. As chair of the English department for 16 years, he was particularly proud of having been instrumental in hiring the three faculty members who followed him as department chair.”

Gardner said one of Dr. Barcus’ most lasting contributions is the interior of Carroll Science Hall, the iconic building that houses the English department.

“He was instrumental in its interior renovation in the early 1980s, and its beauty owes much to Jim’s highly developed aesthetic sense,” he said. “As much as the building itself, his students and colleagues will always bear his imprint. He will be remembered fondly for his wit and wisdom, his loyal friendship and kindness and his generosity of spirit.”

An Ohio native, Dr. Barcus earned his bachelor's degree in English in 1959 from Houghton College, which later honored him as a Distinguished Alumnus. He received his master's degree from the University of Kentucky in English in 1961, and his Ph.D. in English from the University of Pennsylvania in 1968. His major literary interests were romantic poetry and prose, literary criticism and theory and Victorian poetry and prose. In recent years, he focused his writing and teaching on Southern American writers including Edgerton, Hannah and McCarthy.

He proudly served as chair of the Baylor English department from 1980 to 1996 and director of the graduate English program from 2010 until his retirement. He published five books and wrote and presented hundreds of academic papers.

Throughout his career, he sought to instill a love of learning to all he encountered. He was beloved by the students he taught and mentored, regardless of whether they chose to enter academia or pursue a more “worldly” career. He also was beloved by his fellow faculty members, including Dr. Joshua King, who particularly treasured Dr. Barcus’s mentorship.

“Jim Barcus was my mentor when I started as a faculty member at Baylor, and I owe much of my happiness here to his wisdom and love. My wife, daughter and I live far from all of our relatives, and for the last eight years, Jim has been our ‘grandpa’ in Waco, regularly taking us to breakfast on Saturday mornings. He has become for me and my family – as I know he has for many – a model of charity, patience and genuine Christian faith. I am deeply grateful to have known him,” said King, Ph.D., associate professor of English and The Margarett Root Brown Chair in Robert Browning and Victorian Studies.

An avid traveler, Dr. Barcus loved leading groups of Baylor students to study in London. He has traveled extensively throughout the United States and Europe and later to Peru, Cambodia, Kuala Lumpur, Vietnam, China, India and Nepal. Yet all who knew him know he most looked forward to his last journey, and not with fear but with joy and reverence, as he thoughtfully contemplated transcending the bonds of his earthly body and resting gently in the hands of his Lord and Savior, Jesus Christ.

Dr. Barcus was extensively involved in the Waco community. He served on the Vestry of St. Paul’s and on the boards of Historic Waco and Brazos Forum. He also graduated from Sewanee’s Education for Ministry, a course received as part of his commitment to St. Paul’s.

He was preceded in death by the love of his life, Nancy Ellen Barcus, to whom he was married for 44 joyous years until she was called home to be with her Savior; his parents; his brother and his sister.

He is survived by his daughter, Heidi Anne Barcus of Knoxville, Tennessee; son, James Hans Barcus and wife, Carissa, of Houston, and their children, Caitlyn and Jimmy; nephew, Jeffrey Thomas of Phoenix, Arizona, and his daughter, Lauryn; and sister, Mary Ruth Barcus Stamp of Salem, Ohio. His many friends included his Monday night dinner group, who remained faithful throughout his illness.