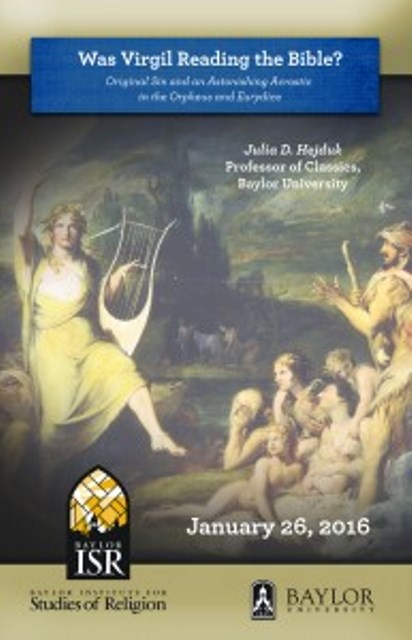 WACO, Texas (Jan. 22, 2016) – The classics have been around for thousands of years, intriguing and entertaining readers for generations. Despite being read so many times, however, they still have mysteries to uncover.

Julia Hejduk, Ph.D, professor of classics, has been reading them for decades, but only recently stumbled upon a discovery that she describes as "the intellectual thrill of a lifetime."

Her lecture, "Original Sin and an Astonishing Acrostic in the Orpheus and Eurydice," details the finding of a new acrostic in Virgil's Georgics that suggests a connection between the ancient writer and the Hebrew Scriptures. An acrostic is a poetic form in which the writer spells out a word or sentence using the first letter or word of each line in a work. Hejduk will present her findings from 4 to 5:30 p.m. on Tuesday, Jan. 26, in the Cox Lecture Hall of Armstrong Browning Library.

"This paper arose because a friend of mine happened to mention that a student of his doing a master's thesis on acrostics in Virgil had discovered a new one in the Georgics, 'Isaia says,' but decided it was probably just a curious accident," Hejduk said. "The more I looked at the context, though, the more I felt that it was hauntingly appropriate, and therefore probably intentional."

With that discovery, Hejduk began researching not only the link between Virgil and Hebrew Scriptures, but also the role multi-word acrostics play in Latin poetry.

"Both of these have the potential to change the way we read some of the most fundamental texts in the Western tradition—to help tear down the wall between Athens (the Greek and Roman classics) and Jerusalem (the Jewish and Christian scriptures), and to show that Latin poets composed vertically as well as horizontally," Hejduk said.

The acrostic Hejduk will be discussing is found near the end of the story of Orpheus and Eurydice, part of Virgil's middle work, the Georgics. The acrostic SI ISAIA AIT (“If Isaiah says”) implies a link between the Greco-Roman classical tradition and Christianity.

"I love reading the classics because they tie us to our roots, helping us to know our position in the whole human family, to discover what about the human condition has changed and what has stayed the same," Hejduk said. "They’ve been around for thousands of years and their beauty never fades."

This event is free and open to the public. Armstrong Browning Library can be found at 710 Speight Ave., Waco, TX 76706.