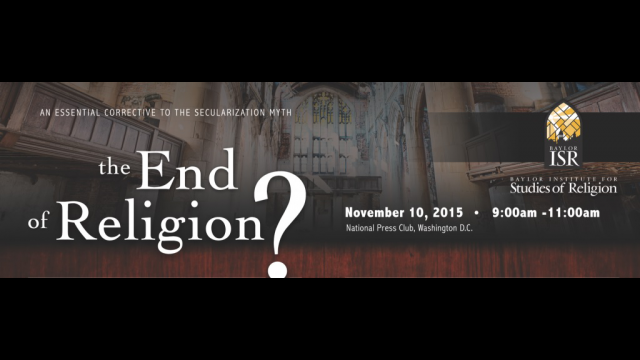 WACO, Texas (Nov. 3, 2015) — Religion scholars from Baylor University’s Institute for Studies of Religion (ISR) will refute surveys that report the decline of American faith during a Nov. 10 conference in Washington, D.C.

“In recent years, religion’s decline and imminent fall has been a source of intense interest to media and academics alike. Repeated surveys have been cited as showing the decline of American faith, the growth of atheism and of the number of people admitting to no religion – the famous ‘Nones’ – so that once famously religious America seems set to secularize on the lines of Godless Europe,” said Byron Johnson, Ph.D., director of Baylor’s Institute for Studies of Religion.

But that representation is “so multiply flawed as to be close to worthless,” he said. “To say this is not to reject the methodology or conclusions of any one particular survey or projection, but rather to challenge the working assumptions of all of them . . . Whichever approach we use –statistical, historical, comparative, sociological - the secularization narrative falls apart. A gulf separates what can reliably and responsibly be said about future projections of religion and the interpretations offered.”

Topics and speakers will include: