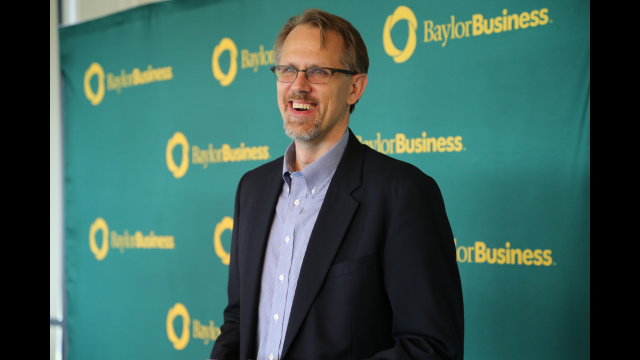 Researchers ask, ‘What explains the success of the microfinanced entrepreneur?’

WACO, Texas (Oct. 19, 2015) – Higher levels of spiritual capital – the motivation, energy and work ethic one gets from a relationship with God – have a positive effect on business success, employment and innovation in developing countries, according to new research from Baylor University’s Hankamer School of Business.

The study, “The Role of Spiritual Capital in Innovation and Performance: Evidence from Developing Economies,” is published in the journal Entrepreneurship Theory and Practice.

“Microfinancing has really taken off in the past two decades. We set out to answer the question, ‘What explains the success of the microfinanced entrepreneur?’” said study co-author Mitchell J. Neubert, Ph.D., management professor and Chavanne Chair of Christian Ethics in Business.

“We found that after controlling for other forms of capital, spiritual capital is still impacting their business’ success. Businesses are growing. More people want to work with them. They’re getting more sales. They’re having the confidence to try new things and venture out. Instead of just selling vegetables, for example, they diversify into something else that other people aren’t selling.”

Researchers measured the success of these business operations based on total sales, numbers of employees and innovation. A total of 282 surveys – 114 from Kenya and 168 from Indonesia – were analyzed.

After accounting for financial capital (how much money one has), human capital (skills and abilities), social capital (personal and professional networks) and psychological capital (attitude and confidence in one’s abilities), researchers centered on spiritual capital.

To measure this, survey participants were asked to self-report their “closeness” to God or Allah and the importance of that relationship by using a scale of 1 to 7 to gauge responses to statements like:

• I have a real sense that God (or Allah) is guiding me.

• I feel God’s presence in my relationships with other people.

• I seek out opportunities to help me grow spiritually.

• I feel a deep sense of responsibility to reduce pain and suffering in the world.

• I give significant portions of my time and money to help other people.

Researchers found that a one-unit increase on the spiritual capital scale associated with a 39.7 percent average increase in sales and a 31.3 percent increase in employment.

“When you add in spiritual capital – their relationship with God and their attempts to live it out and interact with others – it predicted important business outcomes,” Neubert said.

The authors suggest that business owners with spiritual capital may be perceived as being more trustworthy, which, Neubert said, wasn’t surprising.

“If I had a variety of people I could buy from or work with in my village, and I didn’t know much about them, other than this person seems to be living out their faith, and I see them at a church or a mosque, then that’s going to give me some information that I don’t have about the others,” he said. “In developing countries where the rule of law – contracts and enforcement of appropriate business behavior – is limited, you need other informal indicators of who can be trusted.”

People with spiritual capital also were more innovative, according to the study.

Innovation was measured with similar scales as mentioned above, and included statements such as:

• The product or service I am offering is new to the regional market.

• I am distributing my products differently than my competitors.

“Innovation is important because successful people aren’t going to do what everyone else is doing. They’re going to try to figure out what’s not being done or what can be done better,” Neubert said. “This study tells us that a stronger perceived relationship with God, and its influence on how you treat others, may be a source of greater receptivity toward and confidence in implementing new ideas and a heightened awareness of customers’ needs that leads to acting innovatively.”

Baylor University’s Hankamer School of Business provides a rigorous academic experience, consisting of classroom and hands-on learning, guided by Christian commitment and a global perspective. Recognized nationally for several programs, including Entrepreneurship and Accounting, the school offers 24 undergraduate and 13 graduate areas of study. Visit www.baylor.edu/business and follow on Twitter at twitter.com/Baylor_Business.