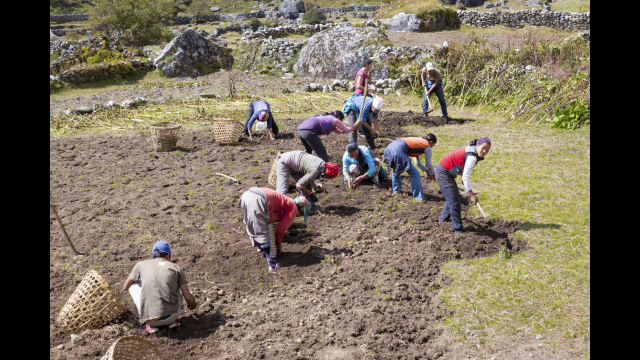 WACO, Texas (Oct. 19, 2015) — As part of an multi-disciplinary study, a team of Baylor researchers found that climatic changes, an increase in agricultural land use and population growth in the Himalaya Mountain basins could have negative impacts on water availability, further stressing a region plagued by natural disasters and food insecurity.

The study—“Projected hydrologic changes in monsoon-dominated Himalaya Mountain basins with changing climate and deforestation”—is published in the Journal of Hydrology.

Using a sophisticated modeling tool called the Soil and Water Assessment Tool (SWAT), the researchers were able to account for land use, soil types, topography and meteorology to predict future climate change and project snowmelt and stream flow to assess the effects of land use on water availability in Nepal.

Their findings indicate that the region—especially during low flow seasons—may be at severe risk for water shortages.

“This study is very important in a country like Nepal since the research is primarily focused for estimating the effects of potential climate variability and land-use changes on water flow processes of specific Himalaya Mountain systems. Water availability has become problematic due to changing climate and land management practices in this region,” said the study’s lead author Ram P. Neupane, Ph.D., a postdoctoral research associate at South Dakota State University.

In a country where roughly 70 percent of the population are dependent on agriculture, this could signal major problems for the most vulnerable in the region—those in poverty.

“The Nepalese population in this region will face many challenges over the coming decades as soil degrades and water resources continue to place enormous strains on food production and intensify recent trends of subsequent malnutrition, particularly in young children,” said Sara E. Alexander, Ph.D., associate professor of anthropology in Baylor’s College of Arts & Sciences and director of the Institute of Archaeology.

Climate change is having a noticeable impact on the Himalaya Mountains.

“This research highlights how geography plays a role in what potential impacts climate change is having on stream flow and erosion in this steep landscape,” White said. “From west to east in Nepal, roughly equivalent to the distance between Lubbock and Houston, differences in land use practices emerge as an important factor for future water conservation efforts. How people in Nepal are using what little land is available for food and habitation is very sensitive to changing water supplied by snow water, glacier melt and monsoonal precipitation.”