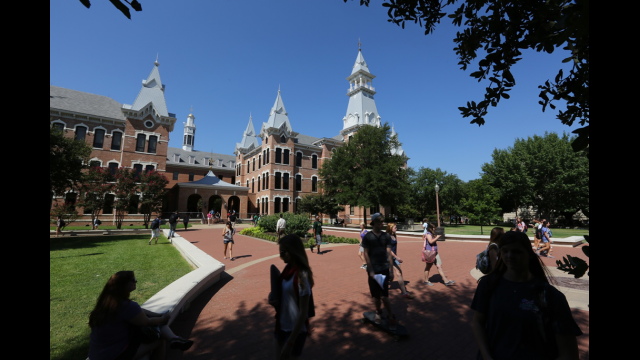 • Continued strong diversity among the Baylor student body, with overall minority enrollment up to 34.4 percent in fall 2015

Baylor’s freshman enrollment of 3,394 is the second-largest freshman class, behind only last year’s 3,625 first-year students. However, the 2015 freshman class is one of the highest academically prepared classes in the university’s history:

• The Academic Index – a combination of high school rank, test scores and GPA – continues to rise and is at its highest point in university history.

• The majority of freshmen – nearly 60 percent, the largest ever – took the ACT and reported an average score of 28, up a point from last year. (That score equals a 1260 on the SAT.) For those students who reported an SAT score, the average this year was 1230.

• Diversity among first-year students remains strong with minority enrollment among Baylor’s freshman class at 34 percent in 2015.

• Out-of-state freshman enrollment increased to a third of the class – 33 percent – up from 30 percent in fall 2014. They represent 46 states and 30 countries.

• Nearly 31 percent of the freshman class, up from about 28 percent last year, reported a legacy connection to Baylor.

Over the past six years, Baylor has improved its fall-to-fall retention among Baylor freshmen by a remarkable 7 percentage points. The latest retention rate from fall 2014 to fall 2015 increased to a record 88.9 percent among Baylor’s first-time freshmen.

“Continued and substantial gains over a sustained period in fall-to-fall freshman retention are unusual for an institution of Baylor’s size. However, to have hundreds of additional students in the fall 2014 freshman class and to be able to have another record-breaking retention number is something that the Baylor community can be very proud of,” said Sinda K. Vanderpool, Ph.D., associate vice provost for academic enrollment management at Baylor. “During the summer of 2014, when we saw that we were going to have a large class, we began reaching out to departments across campus. I remember being literally astounded by how responsive and happy departments were to help meet the needs of the incoming class.”

Previous gains in freshman retention have been:

In addition, the retention rate among all Baylor undergraduates from fall 2014 to fall 2015 improved a half-percentage point to 90.9 percent.

“To have seen the growth for five consistent years in retention means that we are doing something right,” Vanderpool said. “A lot of pieces – from honing our New Student Experience program to being more intentional about how we engage our first-generation college students – have come together in the past few years. It is a good time to be a Baylor Bear, and I am proud to say that we are all coming together to wrap our arms around our newest students in more intentional ways than ever.”

The enrollment report follows the Sept. 9 release of the 2016 U.S. News & World Report rankings, in which Baylor was rated No. 72 among National Universities.

Schools in the National Universities category offer a full range of undergraduate majors, plus master's and doctoral programs, and also are committed to producing groundbreaking research.

Among the highlights for Baylor in this year’s U.S. News ranking:

• Baylor is the second-highest ranked university in the Big 12. The University of Texas at Austin is the highest at No. 52.

• Baylor is rated No. 46 in the U.S. News High School Counselor Rankings.

• Baylor debuted at No. 60 among national universities in the Best Colleges for Veterans ranking. U.S. News rates universities based on their participation in federal initiatives helping veterans and active-duty service members pay for their degrees.