Racial Attitudes of Blacks in Multiracial Congregations Resemble Those of Whites, Study Finds 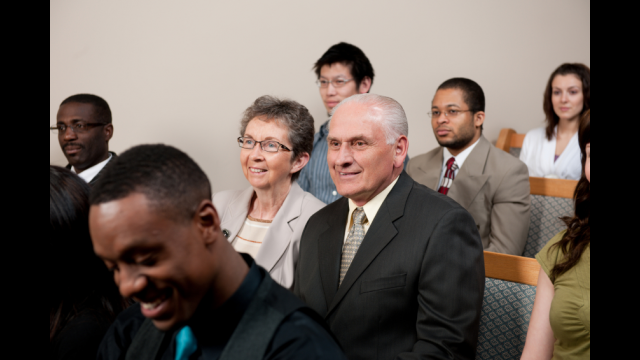 WACO, Texas (Aug. 17, 2015) — Troubling questions about multiracial congregations' potential to address racial inequality are raised by a new national study done by researchers at Baylor University, the University of Southern California and the University of Chicago.

The study — "United by Faith? Race/Ethnicity, Congregational Diversity, and Explanations of Racial Inequality" — is published in the journal Sociology of Religion.

"Whose interests are multiracial congregations serving?" asked researcher Kevin Dougherty, Ph.D., associate professor of sociology in Baylor's College of Arts & Sciences. "We want to believe that they promote a shared, integrated identity for all. But the truth may be that many are advancing a form of Anglo-conformity instead."

The study's focus was explanations for socioeconomic differences between blacks and whites in the United States. Previous research shows that blacks and Hispanics point to discrimination as a cause of black disadvantage, while whites often emphasize personal motivation as a cause, researchers said. But inside multiracial congregations, explanations for inequality become more similar across groups, coming to resemble the views of the whites.

Although more of America's faith communities are becoming racially and ethnically mixed, the dominant white racial frames may go unchallenged. That potentially influences minority attendees to embrace those attitudes, or multiracial congregations may attract minorities more likely to accept the attitudes in the first place.

"The ongoing racial desegregation taking place in America's congregations has many costs," said lead author Ryon Cobb, Ph.D., National Institute on Aging postdoctoral fellow at USC Davis School of Gerontology. "For blacks and Hispanics, affiliation with racially diverse congregations costs them a perspective on racial inequality that is distinct from their white counterparts within and outside their racially diverse congregation."

In a previous study, the researchers found that congregation size also impacts attitudes about racial inequality. Individuals attending very large congregations do not tend to attribute social divisions and economic gaps between blacks and whites to discrimination or lack of quality education but to some other factors. Further research is needed to determine the "why" of those differing perceptions, researchers said.

Also involved in the research was doctoral candidate Samuel L. Perry of the University of Chicago's sociology department.

The College of Arts & Sciences is Baylor University's oldest and largest academic division, consisting of 25 academic departments and 13 academic centers and institutes. The more than 5,000 courses taught in the College span topics from art and theatre to religion, philosophy, sociology and the natural sciences. Faculty conduct research around the world, and research on the undergraduate and graduate level is prevalent throughout all disciplines.