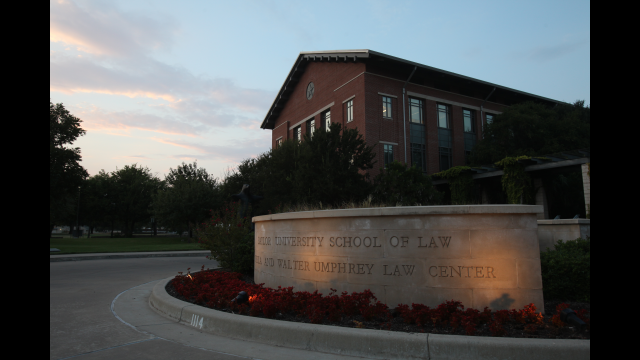 Law students have devoted more than 3,600 hours to pro bono efforts since 2010

WACO, Texas (May 5, 2015) – Baylor Law School has been selected to receive the 2015 American Bar Association (ABA) Pro Bono Publico Award, making it only the third law school in the nation to be honored with the award since 1984.

Each year, the ABA Standing Committee on Pro Bono and Public Service presents five awards to individual lawyers and institutions in the legal profession that have demonstrated outstanding commitment to volunteer legal services for the poor and disadvantaged. Since 2010, Baylor Law School students have devoted more than 3,600 recorded hours to pro bono efforts.

Baylor Law School will be recognized at the 2015 ABA Annual Meeting on Aug. 1.

“We believe that it is our duty as professionals to assist our neighbors in their time of need. With so many of our fellow Americans unable to afford legal services, we believe it is a key part of our mission at Baylor Law School to educate our students about the importance of pro bono work,” said Baylor Law Dean Brad Toben. “We hope that in serving citizens in need we will ignite a fire in the hearts of our Baylor Law students that will grow as they go forward in their legal careers.”

Baylor Law School has devoted meaningful resources to create opportunities for students to assist with the delivery of quality pro bono legal services to those who are in need of legal services, but who cannot afford to pay for them. Since the Law School began tracking efforts through clinics and programs, approximately 380 people have been or are being represented in legal matters or cases, and approximately 125 clients have received legal advice.

“From the beginning of their education, we help our students understand and embrace becoming servant leaders,” Toben said. “This theme, which starts at the first-year orientation, continues through graduation. We have endeavored to create innovative partnerships among local lawyers, legal services providers and law students to accomplish our goal of serving as many in our community as possible.”

In June 2014, the State Bar of Texas and its Legal Services to the Poor in Civil Matters Committee honored Baylor Law School with the 2014 W. Frank Newton Award, which recognizes the pro bono contribution of attorney groups, including law school faculty, whose members have made an outstanding contribution in the provision of, or access to, legal services to the poor. The award is named for W. Frank Newton, former dean of Texas Tech University School of Law and longtime pro bono advocate. In 2014 the American Bar Association awarded the ABA Public Interest Award to Baylor Law School for its implementation of the annual Adoption Day program. In 2012, the Texas Access to Justice Commission awarded the Law Student Pro Bono Award to Brittany Wray for the significant impact her pro bono work had on the community. In 2010, the Texas Access to Justice Commission awarded Baylor Law School with the Law School Commitment to Service Award for being the law school that has most distinguished itself by actively educating its students about access to justice issues.

Established in 1857, Baylor Law School was the first law school in Texas and one of the first west of the Mississippi River. Today, the school has more than 7,200 living alumni. It is accredited by the American Bar Association and is a member of the Association of American Law Schools. Baylor Law School has a record of producing outstanding lawyers, many of whom decide on a career in public service. The Law School boasts two Texas governors, many members or former members of the U.S. Congress and U.S. Senate, two former directors of the FBI, ambassadors, federal judges, justices of the Texas Supreme Court, members of the Texas Legislature, and many bar leaders, including two former presidents of the American Bar Association among its notable alumni. In its law specialties rankings, U.S.News & World Report ranked Baylor Law’s trial advocacy program as the third best in the nation. Learn more at www.baylor.edu/law.