Baylor's Board of Regents Votes to Name School of Social Work for Dean Diana R. Garland 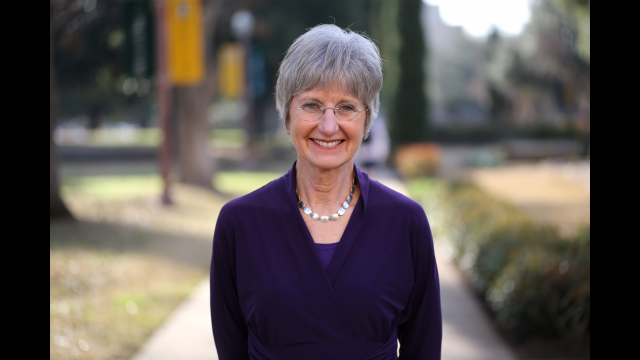 WACO, Texas (April 24, 2015) – Baylor University’s Board of Regents has voted to name the university’s School of Social Work in honor of its inaugural dean, Diana R. Garland, Ph.D., who has announced that she will step down from her position June 1 and return to faculty.

The official naming announcement was made Friday evening during the School of Social Work’s annual Family Dinner, before Social Work students, alumni, faculty, staff and special guests who were gathered to celebrate the School’s 10-year anniversary and honor Garland’s service.

“Diana Garland has a passion for social work delivered in the context of a caring, Christian community,” said Richard S Willis, BBA '81, MBA '82, chair of the Baylor Board of Regents. “Because of her dedication to faith-infused social work, we see Baylor students and alumni making significant, meaningful and lasting contributions in communities around the state of Texas, throughout the nation and across the globe. The board’s decision to name the School of Social Work in Dr. Garland’s honor is a way to extend our profound thanks and appreciation for her years of service; but it’s also a way we can show future generations of Baylor Social Work students that they have a place to come and learn and make a difference because Dr. Garland chose to devote her life’s work to their continued success.”

“The naming of the School in Dr. Garland’s honor is a fitting tribute to her many years of devotion to creating the School of Social Work at Baylor,” said Baylor President and Chancellor Ken Starr. “Dr. Garland has led the School of Social Work with distinction and honor. Under her inspired servant-leadership, the School has grown from a fledgling department to an independent, nationally-recognized institution increasingly known for its research excellence and unwavering Christian commitment. Dean Garland’s nearly 20 years of dedicated service to Baylor students, faculty and staff, as well as to the broader Waco community, has changed lives, healed families, strengthened congregations and expanded the frontiers of knowledge. We are deeply thankful for Dr. Garland’s good and faithful work.”

Garland has served at Baylor since 1997. In 1998, she was named director of the university’s then-new Center for Family and Community Ministries. She became chair of the social work department in 2001 and, in 2005, Baylor named her inaugural dean of the School of Social Work. During the following decade, she championed the School’s rise to national and international recognition, while maintaining its steadfast mission to prepare social workers in a Christian context for worldwide service and leadership.

“I remain speechless in gratitude and awe that my name would be attached to the community of staff, faculty, students, alumni and supporters, past and present, called the Baylor School of Social Work,” Garland said. “All this School has accomplished has been because God has bound us together, magnifying our strengths and shining through our weaknesses. We have achieved far more than any group of people could have humanly done alone, and most certainly not due to any one person’s leadership. I hope that everyone who associates my name with this School will laugh, as I do, that God has once again chosen a flawed but willing character through whom to work.”

Garland, who is stepping down for health reasons, will take a research sabbatical in the fall before returning to the faculty for the spring 2016 semester. The University has named Jon Singletary, Ph.D., as interim dean.

During Garland’s tenure as dean, the School’s faculty has grown from five full-time professors and lecturers to a full-time faculty of 20. Graduate student enrollment in the program has increased to 120 and undergraduate enrollment has grown to 120 students.

Garland earned her undergraduate, master's and doctoral degrees from the University of Louisville. She joined the Baylor faculty after serving as professor of Christian family ministry and social work at The Southern Baptist Theological Seminary in Louisville for 17 years. She also served as dean of the Carver School of Church Social Work and director of the Center for Family Ministries. Prior to teaching, she was administrative director of a pastoral counseling center.

She is author, co-author or editor of 21 books and more than 100 academic articles. Some of her literary works include: “Flawed Families of the Bible: How God’s Grace Works through Imperfect Relationships,” “Inside Out Families: Living the Faith Together,” and “Family Ministry: A Comprehensive Guide.” She has been the editor of the “Journal of Family and Community Ministries” since 1993.

Garland also has given significant service to national social work organizations. She served as a Board Member of the National Association of Deans and Directors of Social Work from 2009 to 2014 and Councilor for the Council on Social Work Education from 2003 to 2013. She served multiple terms as president of the North American Association of Christians in Social Work.

During her time at Baylor, Garland has raised more than $7.4 million in research and program grants, from organizations such as the Lilly Endowment Inc., Pew Charitable Trusts Inc., Annie E. Casey Foundation, Henry Luce Foundation and Ford Foundation. During her tenure, the School of Social Work has established an endowment of $14.5 million.

Visit the Baylor University YouTube channel to view the “We are Called: Baylor Social Work” video in which Garland shares her thoughts about the importance of faith-infused social work education and the legacy she leaves upon her retirement.

ABOUT THE BAYLOR SCHOOL OF SOCIAL WORK

The Baylor University School of Social Work is home to one of the leading graduate social work programs in the nation with a research agenda focused on the integration of faith and practice. Upholding its mission of preparing social workers in a Christian context for worldwide service and leadership, the School offers a baccalaureate degree (BSW), a Master of Social Work (MSW) degree and three joint-degree options (MSW/Master of Business Administration, MSW/Master of Divinity and MSW/Master of Theological Studies) through a partnership with Baylor’s Hankamer School of Business and George W. Truett Theological Seminary, and a Ph.D. program. Visit www.baylor.edu/social_work to learn more.