Dr. Diana Garland, Dean of the School of Social Work, to Step Down, Return to Faculty 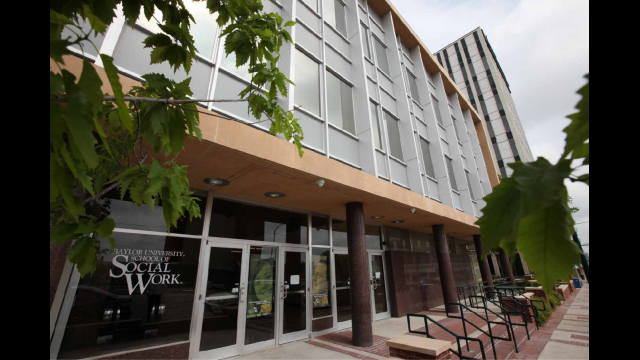 “For nearly two decades, Dr. Garland has faithfully served Baylor University and labored tirelessly to advance the mission of the School of Social Work,” said Baylor President and Chancellor, Judge Ken Starr. “Under her leadership, social work at Baylor has grown from a strong department to an independent school whose impact is evident not just on campus or in our community, but in the study, discipline, and practice of Christian social work nationally.”

“Diana Garland has done an amazing job leading the School of Social Work. She is beloved by our students and alumni and has earned the trust and respect of the faculty and administration. While I am most certainly honored and humbled at this interim opportunity, I know that no one can adequately step in to fill the shoes of Diana Garland,” Singletary said. “My focus will be on continuing the good work she has done leading the School of Social Work and keeping us moving forward as effectively and energetically as I can during this period of transition.”

Garland, who is stepping down for health reasons, will take a research sabbatical in the fall before returning to the faculty for the spring 2016 semester.

“I came here as a stranger, neither a Texan nor a Baylor alumna, and I found glad welcome. Baylor University became my community of colleagues and friends who have encouraged me to explore with them what a School of Social Work in a Christian university could contribute to scholarship and in preparation of leaders for the church and for the world,” Garland said. “I leave the role of dean with great joy, because I believe that what we have done together, we have been able to do only because God was at work in our midst, and that work will continue.”

Garland’s leadership as dean of the School of Social Work has garnered the attention of her colleagues.

“I have been amazed by Dr. Garland’s leadership,” said Frank Raymond, Ph.D., retired dean of the College of Social Work at the University of South Carolina. “Her love of Baylor’s School of Social Work, vision for its future, commitment to its mission, steadfast efforts, ability to motivate faculty and staff, manifestation of God’s love in her work and reflection of her faith commitment in her dealings with everyone she encounters — all of these qualities have made her a great leader and have made the school an outstanding institution.”

During Garland’s tenure as dean, the Baylor School of Social Work has risen to national prominence, and the faculty has grown from five full-time professors and lecturers to a full-time faculty of 20. Graduate student enrollment in the program has increased to 120 and undergraduate enrollment has grown to 120 students.

Garland earned her undergraduate, master's and doctoral degrees, all from the University of Louisville. She joined the Baylor faculty in 1997, after serving as professor of Christian family ministry and social work at The Southern Baptist Theological Seminary in Louisville for 17 years. She also served as dean of the Carver School of Church Social Work and director of the Center for Family Ministries. Prior to teaching, she was administrative director of a pastoral counseling center.

She is author, co-author or editor of 21 books and more than 106 academic articles. Some of her literary works include: “Flawed Families of the Bible: How God’s Grace Works through Imperfect Relationships,” “Inside Out Families: Living the Faith Together,” and “Family Ministry: A Comprehensive Guide.” She has been the editor of the “Journal of Family and Community Ministries” since 1993.

Garland also has given significant service to national social work organizations. She served as a Board Member of the National Association of Deans and Directors of Social Work from 2009 to 2014 and Councilor for the Council on Social Work Education from 2003 to 2013. She served multiple terms as president of the North American Association of Christians in Social Work.

Since coming to Baylor in 1997, Garland has raised more than $7.4 million in research and program grants, from organizations such as the Lilly Endowment Inc., Pew Charitable Trusts Inc., Annie E. Casey Foundation, Henry Luce Foundation and Ford Foundation. During her tenure, the School of Social Work has established an endowment of $14.5 million.

In December 2010, the Baylor School of Social Work tripled its teaching and lab space when it moved into renovated space in downtown Waco.

Diana Garland will be honored at a “Family Dinner” event on April 24 at the Baylor Club, located in McLane Stadium. The School of Social Work will also celebrate its 10th anniversary.

The University plans to initiate a national search in the fall of 2015 for a new dean of the School of Social Work.

ABOUT THE BAYLOR SCHOOL OF SOCIAL WORK

The Baylor University School of Social Work is home to one of the leading graduate social work programs in the nation with a research agenda focused on the integration of faith and practice. Upholding its mission of preparing social workers in a Christian context for worldwide service and leadership, the School offers a baccalaureate degree (BSW), a Master of Social Work (MSW) degree and three joint-degree options (MSW/Master of Business Administration, MSW/Master of Divinity and MSW/Master of Theological Studies) through a partnership with Baylor’s Hankamer School of Business and George W. Truett Theological Seminary. Visit www.baylor.edu/social_work to learn more.