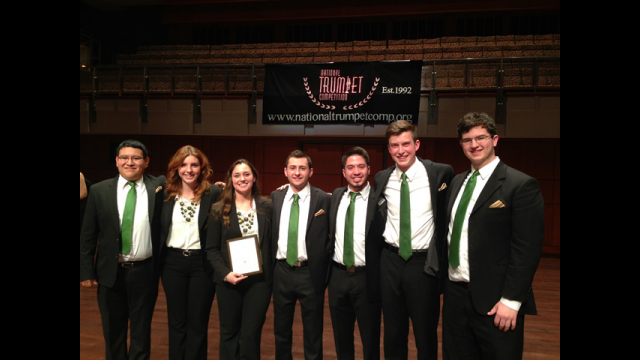 "I'm very proud of the tradition of artistry our ensembles and soloists have established at NTC and the demeanor they bring to the event,” said Wiff Rudd, professor of trumpet in Baylor’s School of Music.

Baylor Trumpets Green group advanced as one of three teams that competed in the Large Ensemble Division finals, winning first place. Second place went to a group from University of Miami and third to Oklahoma State University.

Baylor Trumpets are the first group to have taken first three times in the history of the competition.

“These results are unprecedented,” Rudd said. “I’m particularly proud of this group of students as they were probably the youngest ensemble in final round.”

Baylor Trumpets also had 10 semifinalists advance in the solo division this year, more in one year than any school in the 24-year history of the event. Eleven Baylor Trumpet ensembles have performed at NTC since 2009, eight of which advanced to the finals and six that won prizes.