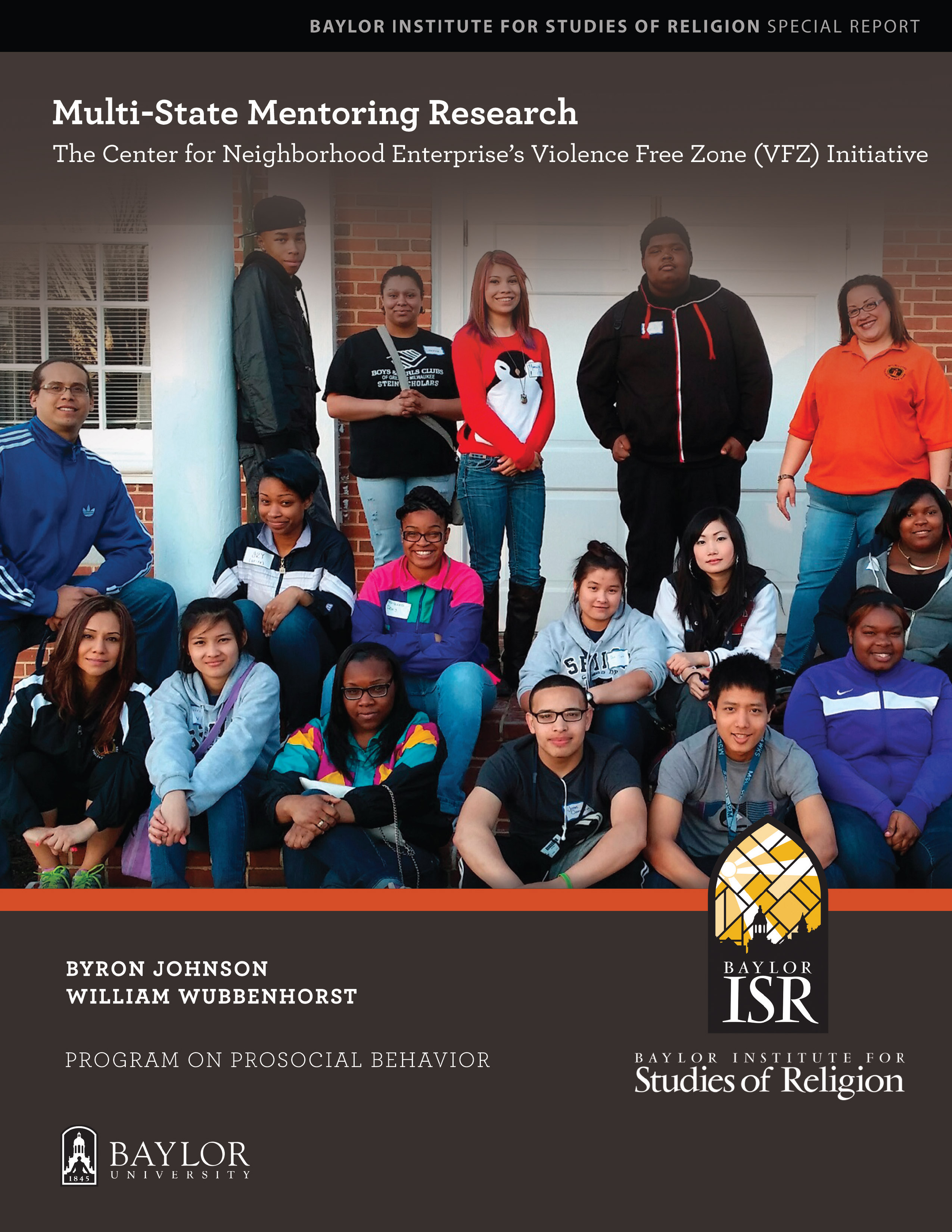 WACO, Texas (March 23, 2015) — A youth violence-reduction mentoring program for trouble-plagued schools in urban centers has contributed to improved student behavior and performance at high-risk middle and high schools in Milwaukee, Wisconsin, and Richmond, Virginia, according to findings of a new Baylor University case study.

The “Violence-Free Zone” (VFZ) is the national model of mentoring students in areas with high levels of crime and violence. The VFZ mentoring program is designed to address behaviors that result in truancies, suspensions, violent incidents, involvement in drugs and gangs and poor academic performance in public middle and high schools.

Four evaluations of VFZ programs conducted between 2007 and 2013 show positive impact, including a unique return-on-investment (ROI) analysis of a VFZ high school in Milwaukee, according to study leaders Byron Johnson, Ph.D., director of the Program on Prosocial Behavior in Baylor’s Institute for Studies of Religion, and William Wubbenhorst, non-resident fellow at Baylor, scholar in faith-based and community initiatives and co-president of Social Capital Valuations, LLC.

The case study also includes an evaluation of school-level improvements at two VFZ high schools in Richmond, as well as the impact of the Milwaukee VFZ program specifically on youths directly receiving mentoring services from the VFZ “Youth Advisers” — adults who work full time in the schools as hall and cafeteria monitors, role models and mentors. They work closely with school safety officers, teachers and counselors to provide a support system for students.

Among the key findings:

1. A four-year study (academic years 2007 to 2010) of the VFZ Program in Milwaukee’s School for Career and Technical Education showed a:

2. A Return-On Investment Analysis of the Milwaukee school’s program showed an estimated lifetime savings of $8.32 for every $1 invested in the VFZ program, based on reduced administrative costs from fewer suspensions; reduced police costs from service calls; reduced juvenile detention costs; lower truancy rates; savings from reduced number of auto thefts within 1,000 feet of the school; savings from reductions of such high-risk behaviors as drinking, violence against intimate partners or violence against oneself; and projected increases in lifetime earning associated with higher high school graduation and college enrollment rates.

3. A four-year study (from academic years 2009-2012) of overall school-level trends of the VFZ program in Richmond showed a:

4. A one-year study (academic year 2013-14) of VFZ students in three middle schools and eight high schools in Milwaukee showed a:

The Milwaukee Violence-Free Zone program was created and is directed by the Washington, D.C.-based Center for Neighborhood Enterprise (CNE) and implemented in Milwaukee schools by CNE’s community partners, Running Rebels Community Organization and the Milwaukee Christian Center. The Richmond program was operated in partnership with the Richmond Outreach Church.

“The VFZ initiative not only is measurably effective in reducing violence, it is cost-effective,” said CNE President Robert L. Woodson. “It produces saving to the community by avoiding court and incarceration costs and by promoting attendance and academic achievement. It makes it possible for teachers to teach and students to learn.”

For more information about the Multi-State Mentoring Research study, visit ISR's website at

and click on the Violence Free Zones study; or visit the Center for Neighborhood Enterprise’s website at www.cneonline.org