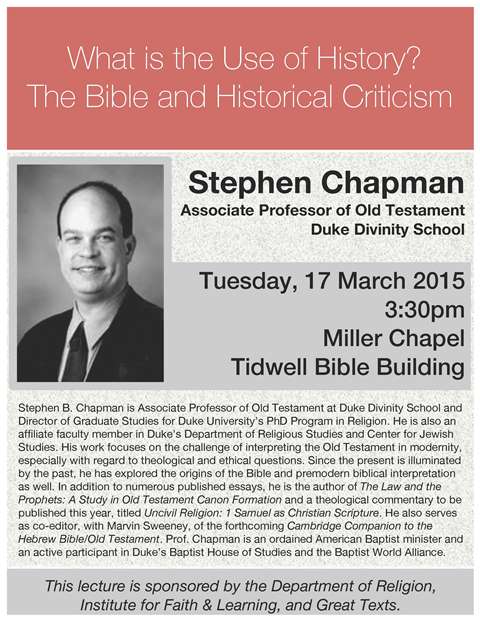 Chapman, an associate professor of the Old Testament at Duke Divinity School, will present a lecture titled, “What is the Use of History? The Bible and Historical Criticism.”

“Some scholars of the Old Testament see it as simply an ancient writing, whereas others say it serves as an authority for the religions of Christianity and Judaism,” said Barry Harvey, Ph.D., professor of theology in the Honors College and lecture organizer. “Chapman will discuss how the academic study of Scripture does not take away from its inherent authority, but rather enhances the use of these texts in worship and teaching.”

After majoring in religious studies at Yale University, Chapman served as a legislative assistant to a member of Congress before returning to Yale for graduate study. He became an ordained pastor in the American Baptist Churches while earning his doctorate in Old Testament from Yale. He has held research positions in Germany and Israel.

His studies center on the issues of canon, hermeneutics and theological approaches to scriptural interpretation. He is currently a member of the Baptist World Alliance, where he is a member of both its Workgroup on Theological Education and its Committee on Doctrine and Interchurch Cooperation.

The lecture is sponsored by the Great Texts Program, Baylor’s department of religion and the Institute for Studies of Religion.

The event is free and open to the public. Miller Chapel is located within Tidwell Bible Building at 600 Speight Ave.