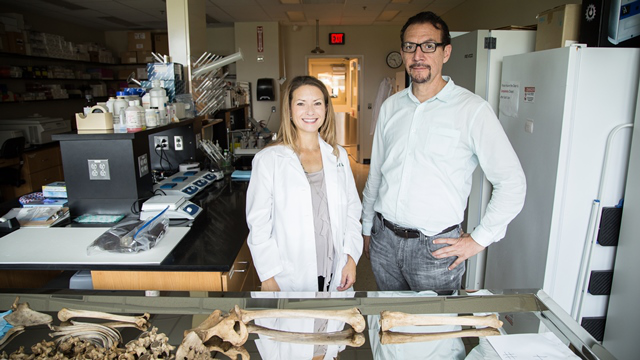 Lori Baker, Ph.D. (left) stands next to Carlos Colon (right) in her forensics lab in the Baylor Sciences Building. Colon co-produced the documentary on immigrant death in which Baker is featured. Courtesy photo.
Tweet
Jan. 30, 2015

WACO, Texas (Jan. 30, 2015) – “I wanted to tell a story that would help regular people and policy makers look at the people who are suffering in the crisis and ask themselves ‘Are the immigrants dying equal human beings with us?’”

Carlos Colón, co-producer and Resident Scholar in Baylor’s Institute for Studies of Religion, believes the answer to his question is yes.

“It’s connected to my life’s story. What attracted me to this project me was being an immigrant myself. I have been affected by this topic because of my family, friends and churches where I have served,” Colón said.

The film is a collaboration between co-producers Colón and Pilar Timpane, promotional specialist at Duke University. It features the forensic work and research of Lori Baker, Ph.D., associate professor of anthropology at Baylor.

Baker is known for her work along the U.S./Mexico border in identifying the remains of deceased immigrants in an effort to reunite them with their families. That culminated in her humanitarian project, Reuniting Families.

“The human rights disaster that is occurring on our border is something that should concern every American citizen. I am so grateful to Carlos and Pilar for their passion regarding this issue. They have created not only a documentary that is educational but also created through music a beautiful tribute to the missing,” Baker said.

Chris Martin, cellist featured in the documentary, will give a live performance at the film screening. In addition, Jenny Howell, doctoral student in Religion, will give a brief response, and a moderate question and answering session with the producers will follow the film.

For more information about the event, visit HERE

For more information about the Reuniting Families project, visit www.reunitingfamilies.org