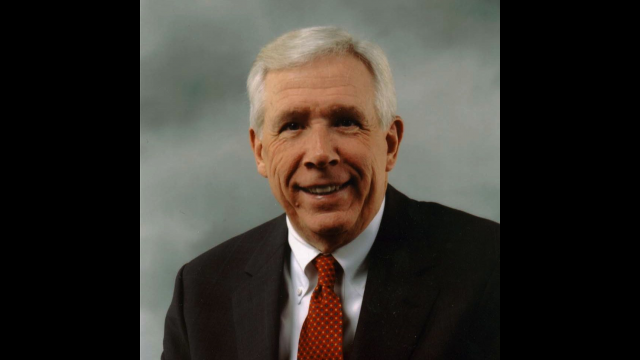 Former Virginia Congressman Frank Wolf has been appointed holder of the Jerry and Susie Wilson Chair in Religious Freedom at Baylor.
Tweet
Jan. 19, 2015

Recognized as the “conscience” of the Congress, the longtime Virginia Congressman will lead Baylor’s efforts to advance issues and study of religious freedom and human rights on Capitol Hill

WACO, Texas (Jan. 19, 2015) – Baylor University announced today that former U.S. Rep. Frank Wolf, who represented Virginia’s 10th District in Congress from 1981 until his retirement on Jan. 3, has been named the Jerry and Susie Wilson Chair in Religious Freedom.

As the Wilson Chair, Wolf will lead Baylor’s efforts on Capitol Hill and throughout the world to address the significant issues of freedom of conscience and worship and, in particular, Christianity’s enduring role in promoting human freedom.

“I am looking forward to working with colleagues at Baylor University to advance the case for religious freedom,” Wolf said. “I have been involved in promoting religious liberty for many years in Congress, and now I look forward to collaborating with scholars, religious leaders and the laity in what I believe is one of the most important struggles of our time.”

“One of the true foundational freedoms in the great American experiment is that of religious liberty for all people,” said Baylor President and Chancellor Ken Starr. “Congressman Frank Wolf has been widely recognized as the ‘conscience’ of the Congress and a champion of religious freedom in both U.S. domestic and foreign policy. We are truly honored and humbled that Congressman Wolf will join Baylor as holder of the Wilson Chair in Religious Freedom.

“This appointment represents a remarkable opportunity to advance the study and protection of the essential right of religious freedom and to vigorously address the profound issues of religious liberty and Christianity’s contributions to human flourishing throughout the world,” Starr said. “It is especially exciting to us that on a day when we honor the significant contributions of Dr. King to freedom for all God’s children, we would be welcoming Congressman Frank Wolf to Baylor to continue to foster the conversation of religious freedom for all.”

In addition to strengthening and affirming congressional support for the preservation, protection and defense of religious freedom in Congress, Wolf will collaborate on critical projects involving international religious freedom through diplomatic engagement and integrating religious freedom into broader foreign policy. He also will focus on fostering and facilitating the understanding of Christianity as a liberator of pressing social issues, such as human trafficking, women’s rights, rights of refugees and human suffering both domestically and internationally.

“Congressman Wolf has spent more than three decades of his life fighting for religious freedom. It is an honor to have a statesman like Frank Wolf join our faculty,” said Byron R. Johnson, Ph.D., director of Baylor’s Institute for Studies of Religion (ISR) and Distinguished Professor of the Social Sciences.

First elected in 1980, Wolf announced in December 2013 that he would leave the House of Representatives at the end of his 17th term to focus exclusively on human rights and religious freedom. In announcing his decision, Wolf said that as a follower of Jesus, he is called to work for justice and reconciliation and to be an advocate for those who cannot speak for themselves.

Wolf also is the author of the legislation to create a special envoy at the U.S. State Department to advocate for religious minorities in the Near East and South Central Asia. Long before the “Arab Spring” turned into an “Arab Winter,” Wolf sounded the alarm about the worsening plight of religious minorities, notably the ancient Christian communities in both Iraq and Egypt.

Wolf founded and served as co-chairman of the Tom Lantos Human Rights Commission, a bipartisan organization made up of nearly 200 members of Congress who work together to raise awareness about international human rights issues. He has traveled to Ethiopia, Sudan, Sierra Leone, the Democratic Republic of the Congo, Rwanda and other countries in Africa to see the tremendous suffering due to corrupt governments, war, AIDS and famine. He led the first congressional delegation to Darfur. He also has worked to call attention to the human rights abuses and religious persecution in the People’s Republic of China, Tibet, Romania, Nagorno-Karabakh, Chechnya, Bosnia, Kosovo, East Timor and the Middle East.

Wolf has been honored by a number of organizations for his work on human rights and religious persecution. Among them: the Presidential Eleanor Roosevelt Award for Human Rights; the Christian Legal Society’s William Bentley Ball Life and Religious Liberty Defense Award; the Alliance for Defending Freedom’s Originalism & Religious Freedom Award; and Prison Fellowship Ministries William Wilberforce Award. He also received the 2014 Democracy Service Medal from the National Endowment for Democracy and the Leadership Award from Freedom House. Wolf was named WORLD Magazine's Daniel of the Year award for 2014.

In December 2014, Baylor announced a $2 million gift from Jerry and Susie Wilson of Dallas to endow a chair in religious freedom to support the University’s educational mission and its Institute for Studies of Religion.

ABOUT THE BAYLOR UNIVERSITY INSTITUTE FOR STUDIES OF RELIGION