Baylor Rises to No. 71 in Latest U.S. News Rankings 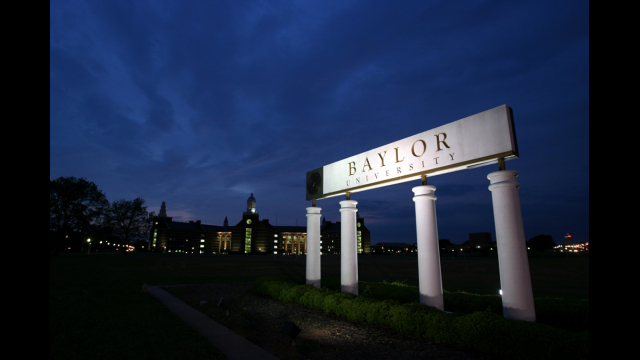 WACO, Texas (Sept. 9, 2014) – In the latest rankings released today by U.S. News & World Report, Baylor University moved up to No. 71 among National Universities, achieving the University’s best rating since U.S. News began ranking institutions beyond the top 50 in 2002. Baylor was ranked No. 75 by U.S. News in 2013.

Schools in the National Universities category offer a full range of undergraduate majors, plus master's and doctoral programs, and also are committed to producing groundbreaking research.

Among the highlights for Baylor in this year’s U.S. News ranking:

• Baylor is second-highest ranked university in the Big 12. The University of Texas at Austin is the highest at No. 53.

• Baylor jumped seven places to No. 45 in the U.S. News High School Counselor Rankings. These rankings were determined by guidance counselors from a nationwide sampling of public high schools in the 2013 U.S. News Best High School rankings that were gold, silver or bronze medal winners, as well as from the largest private independent schools nationwide, who reported which universities they think offer the best undergraduate education to their students.

• 86 percent freshman retention rate over a four-year period – highest since 2009.

To rank universities, U.S. News places each school into a category based on its mission as a research university or liberal arts college and gathers data from and about each school in up to 16 areas related to academic excellence. Each indicator is assigned a weight (expressed as a percentage) based on U.S. News’ judgments about which measures of quality matter most and ranks schools based on their composite weighted score.

The data for the 2015 edition of Best Colleges were gathered in the spring and summer of 2014.

The U.S. News rankings are available at www.usnews.com.