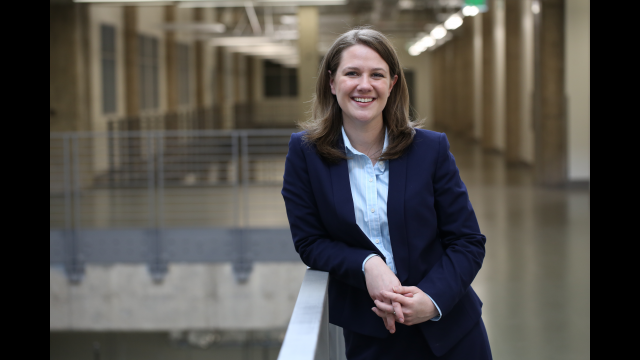 Then, as Sarah Stair’s love of building things grew, she advanced to constructing weight-bearing bridges out of paper and participating in the egg-drop contest – a rite of passage for students involved in science Olympiads and other such competitions.

Eventually, the Arlington, Texas native entered Baylor University, where, this Saturday, she will graduate with a Master of Science in Mechanical Engineering from Baylor’s School of Engineering and Computer Science. Nine days later, on Aug. 26, she will begin her doctoral studies as Baylor’s first candidate in the new mechanical engineering Ph.D. program, which launches this fall.

“This has been such a phenomenal working environment – from the students to the professors, for the opportunities that have opened up since I’ve been here,” Stair said of the university.

Stair has excelled at Baylor. Her research in materials science has led to awards, publications, a top-tier internship at Sandia National Laboratories and a prestigious national fellowship.

She was awarded the National Science Foundation Graduate Research Fellowship, which includes three years of support, a $32,000 annual stipend, a $12,000 cost-of-education allowance to the institution, international research and professional development opportunities, and access to the XSEDE Supercomputer. Past recipients of the fellowship include U.S. Secretary of Energy Steven Chu, Google founder Sergey Brin and several Nobel Prize winners.

“I would’ve never thought that I’d have all of these opportunities or the NSF grant or anything like this two years ago,” she said.

How did she get from building Legos in her childhood home to being Baylor’s first Ph.D. candidate in mechanical engineering?

In addition to science Olympiads, Stair was a key member of her high school math team, which ate up her Saturdays and solidified her zeal for calculations. She also played varsity volleyball and tennis, which, she said, improved her hand-eye coordination.

Many passions. Many opportunities.

“I asked different people, ‘What combines science and math really well?’ and everybody said engineering,” Stair said, adding that she was also influenced by her father, an engineer in the aerospace industry.

She chose Baylor, and graduated with her bachelor’s degree in 2012.

As a graduate student, Stair’s research centered on the development of non-destructive testing techniques – specifically, the use of ultrasound – for carbon fiber composite materials. The research can be utilized by the aerospace and transportation industries, Stair explained.

“Sarah is one of hardest working students I've ever been associated with,” said her advisor David Jack, Ph.D., assistant professor of mechanical engineering. “Not only is she good in the lab, but she's good on the theoretical side of things. I know that wherever she goes, she will rise to the top of any group.”

Stair and Jack do most of their combined research in the Materials Characterization Lab in the Baylor Research and Innovation Collaborative (BRIC). Stair said she was able to conduct similar research during her recent summer internship at Sandia in New Mexico.

"This summer was a wonderful experience. I feel blessed to have had the opportunity to work with such welcoming people while at the same time learning from each of them," she said. “Sandia is definitely on the leading edge of research. They’re developing that new technology that you’re going to see maybe in a few years.”

Stair plans to continue the ultrasound research as a doctoral candidate.

With more than 10 percent of Baylor University’s freshman class pursuing major courses of study in the School of Engineering and Computer Science (ECS), the focus remains on preparing graduates for professional practice and responsible leadership with a Christian world view. ECS majors include bioinformatics, computer science, electrical and computer engineering, general engineering, and mechanical engineering. Among ECS graduate programs are Master of Science degrees in all disciplines, a Ph.D. in electrical and computer engineering, and several dual degree programs. The Teal Residential College for Engineering and Computer Science, in which students and faculty live, fosters the pursuit of wisdom, academic excellence, and meaningful relationships for the development of diverse, innovative leaders.